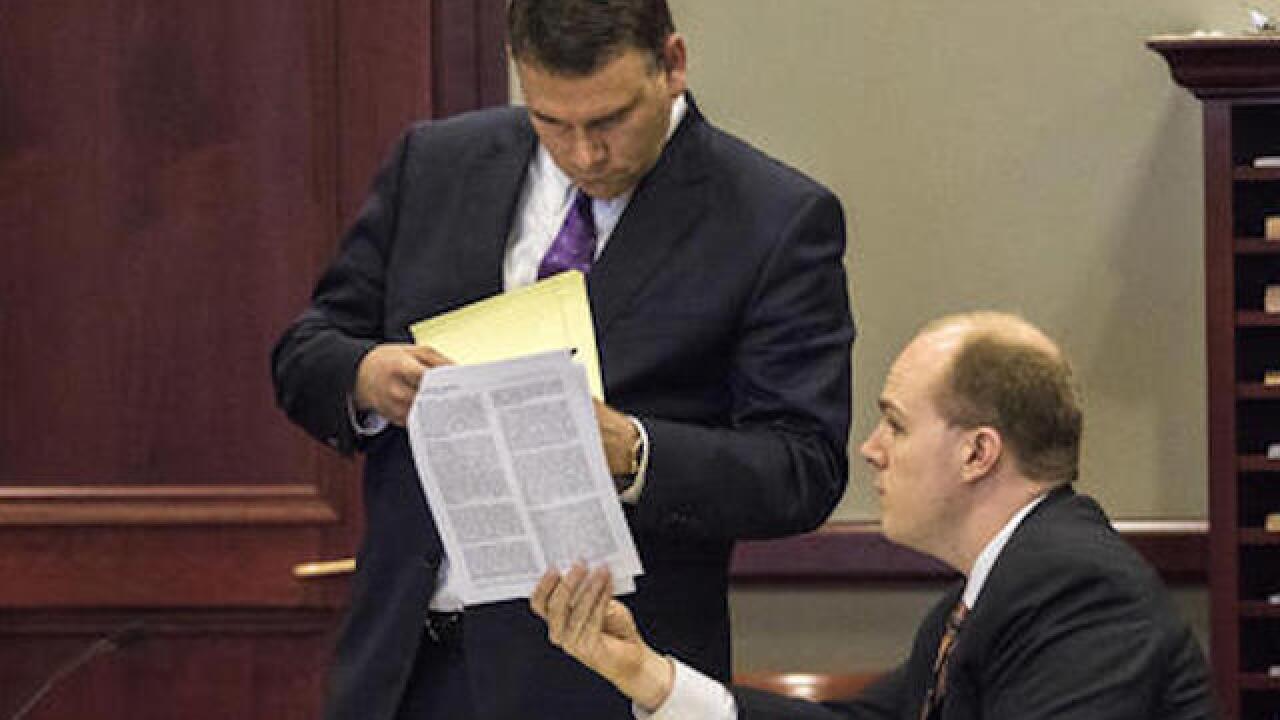 Daily Chronicle via AP
&lt;p&gt;Attorneys Gabriel Fuentes, left, and Shaun Van Horn go over files before court on Friday, April 1, 2016, in Sycamore, Ill., after they filed a motion requesting DeKalb County Judge William Brady vacate their client Jack McCullough's murder conviction or release him on bond. McCullough was convicted in 2012 for the 1957 killing of 7-year-old Maria Ridulph, of Sycamore. (Danielle Guerra/Daily Chronicle via AP)&lt;/p&gt;

SYCAMORE, Ill. (AP) — A 76-year-old man from Washington state who a prosecutor says was wrongly convicted in the abduction and killing of a 7-year-old Illinois schoolgirl in 1957 will be released from prison, a judge ordered Friday.

The hearing, presided over by Judge William P. Brady, was held in Sycamore, about 70 miles west of Chicago and near where Maria Ridulph was abducted as she played in the snow. Forest hikers found the girl's remains five months later.

In 2012, another judge convicted Jack McCullough in Maria's death, in one of the oldest unsolved U.S. cases ever to go to trial. McCullough was sentenced to life in prison.

DeKalb County State's Attorney Richard Schmack later conducted a six-month review of evidence and concluded that McCullough could not have killed Maria, citing evidence supporting the suspect's claim that he had been 40 miles away when the second-grader was abducted.

Maria's disappearance made headlines nationwide in the 1950s, when reports of child abductions were rare.

She had been playing outside in the snow with a friend on Dec. 3, 1957, when a young man approached, introduced himself as "Johnny" and offered them piggyback rides. Maria's friend dashed home to grab mittens, and when she came back, Maria and the man were gone.

At trial, prosecutors said McCullough was Johnny, because he went by John Tessier in his youth. They said McCullough, then 18, dragged Maria away, choked and stabbed her to death.

Schmack, who wasn't involved in McCullough's case and was elected to the state's attorney post as McCullough's trial came to an end, filed a scathing report with the court last month that appeared to pick the case apart, point-by-point.

McCullough's long-held alibi was that he was in Rockford, attempting to enlist with the U.S. Air Force at a military recruiting station, on the night Maria disappeared.

Schmack said newly discovered phone records proved McCullough had, as he long-claimed, made a collect call to his parents at 6:57 p.m. from a phone booth in downtown Rockford — which is 40 miles northwest of where Maria was abducted between 6:45 p.m. and 6:55 p.m.

Schmack also reviewed police reports and hundreds of other documents, including from the Air Force recruitment office, which he said had been improperly barred at trial. In his review he said the documents contained "a wealth of information pointing to McCullough's innocence, and absolutely nothing showing guilt."

He also noted that Maria's friend had identified McCullough as the killer five decades later from an array of six photographs; McCullough's picture stood out, partially because everyone but him wore suitcoats and their photos were professional yearbook pictures.

Maria's murder haunted the Sycamore for decades, and McCullough's conviction four years ago seemed to bring some closure. Those wounds now threaten to reopen.

Members of her family remain convinced that McCullough is guilty and have sought the appointment of a special prosecutor in an attempt to keep him behind bars. Maria's brother, 70-year-old Charles Ridulph, still lives in Sycamore and has said in recent weeks that his family feels let down by the state prosecutor's office about-face.