Here are the Confederate memorials that will be removed after Charlottesville 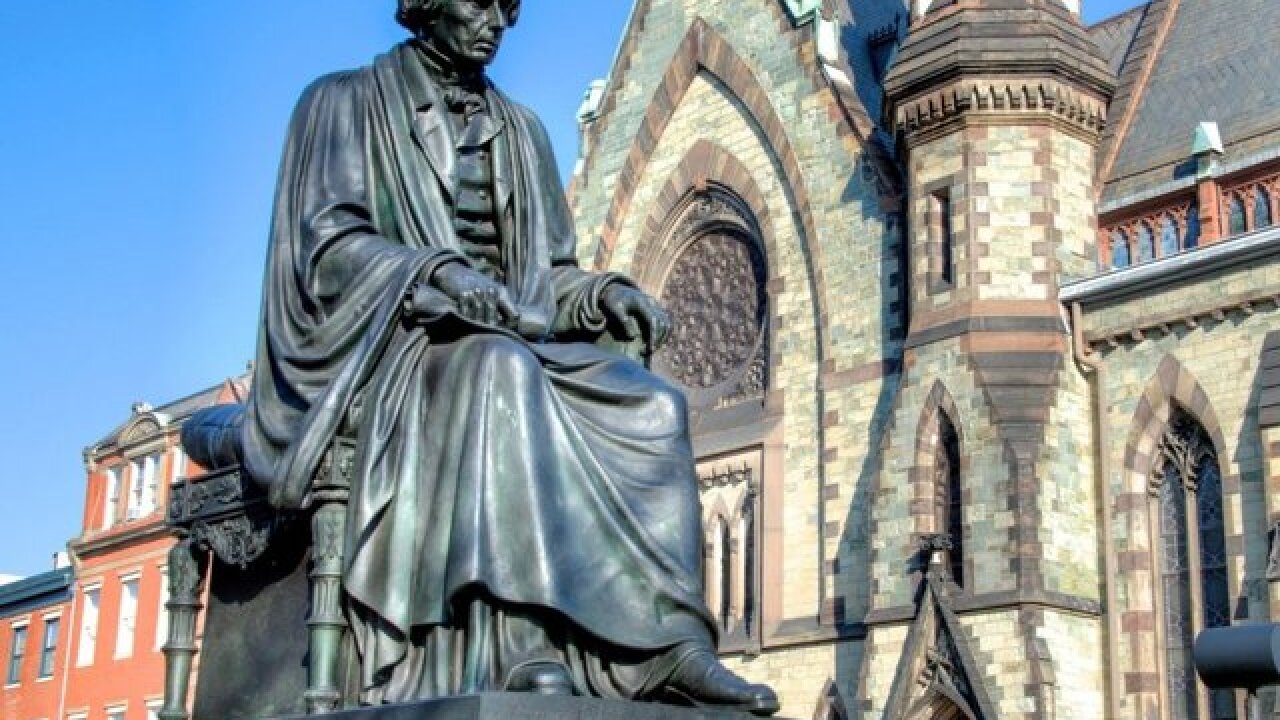 More than 150 years after the Civil War ended, the Confederacy is memorialized with statues, monuments and historical markers across the United States.

Some say they mark history and honor heritage. Others argue they are racist symbols of America's dark legacy of slavery.

A nationwide debate surrounding this issue has been underway since Dylann Roof killed nine African-Americans in a Charleston, South Carolina, church in 2015 in an effort to "start a race war." And it flared up again after white nationalists marched last weekend to protest the removal of a Robert E. Lee statue in Charlottesville, Virginia, where a counterprotester was killed amid violent clashes between demonstrators.

The National Register of Historic Places does not keep a detailed list of Confederate memorials. In 2016, the Southern Poverty Law Center identified 1,503 Confederate "place names and other symbols in public spaces" across the nation but admitted the study was "far from comprehensive." Some Civil War monuments in the South, such as at battlefields, do not have pro-Confederate symbolism.

Many local government officials are now weighing whether to keep Confederate memorials in their cities and towns. Here's a state-by-state breakdown:

Lexington will relocate the statues of John Hunt Morgan and John C. Brackenridge after the City Council unanimously approved their removal.

"By relocating these statues we are not destroying, hiding or sanitizing history. We are honoring and learning our history through this relocation," Lexington Mayor Jim Gray wrote on Twitter.

Gray had announced his intent to relocate the statues in a series of tweets just after the Charlottesville attack.

The Hillsborough County Board of Commissioners voted in July to remove the Memoria In Aeterna monument, which honors Confederate soldiers, from a county courthouse. The county commission voted Wednesday that the monument will only be removed if donations can be raised to cover the cost, estimated to be as high as $280,000. The money must be raised by September 16, the commission said.

The Tampa Bay Buccaneers, Lightning and Rays donated an undisclosed amount of money to help move the statue, the teams said in a joint statement Thursday. The teams said the monument "does not reflect the values of our community."

"Now more than ever before, we must stand united and committed to diversity and inclusion as we all attempt to heal from the tragedy in Charlottesville," the statement read.

The board is also expected to relocate the Hillsborough County Civil War Veterans Monument.

Busts of Lee and Confederate Lt. Gen. Stonewall Jackson will be removed from the City University of New York's Hall of Fame for Great Americans because "New York stands against racism," Gov. Andrew Cuomo tweeted Wednesday. "There are many great Americans, many of them New Yorkers worthy of a spot in this great hall," Cuomo tweeted. "These two Confederates are not among them."

Also Wednesday, Cuomo requested that the acting US secretary of the Army, Ryan McCarthy, reconsider his refusal to rename General Lee Avenue and Stonewall Jackson Drive at Fort Hamilton in Brooklyn.

The Charlottesville City Council voted in April to remove a statue of Confederate Gen. Robert E. Lee at the newly renamed Emancipation Park, CNN affiliate WVIR reported. The violence there over the weekend came after this decision. The removal is on hold pending litigation.

Madison Mayor Paul Soglin announced Thursday that two Confederate memorials at the Forest Hill Cemetery will be removed. In a statement, Soglin said taking down the "monuments will not erase our shared history. The Confederacy's legacy will be with us, whether we memorialize it in marble or not."

"There should be no place in our country for bigotry, hatred or violence against those who seek to unite our communities and our country," the mayor's statement said.

The removal had "minimal or no disruption to the cemetery itself."

Birmingham Mayor William Bell ordered plastic draped over a Confederate monument at Linn Park and a plywood structure built around it while officials decide what to do. State law prohibits a city from taking down the monument, he said, but not covering it up. "This country should in no way tolerate the hatred that the KKK, neo-Nazis, fascists and other hate groups spew," he said. "The God I know doesn't put one race over another."

Alabama Attorney General Steve Marshall said he will sue Bell and the city, citing state law that prohibits the "relocation, removal, alteration, or other disturbance of any monument on public property that has been in place for 40 years or more."

Jacksonville City Council President Anna Lopez Brosche said she asked city officials for an inventory of all Confederate monuments and markers. Brosche said in a statement that she plans to submit legislation to relocate the monuments to museums for "appropriate historical context."

The city of Atlanta said it is currently reviewing options for the Peace Monument in Piedmont Park. Mayor Kasim Reed asked the public art commission to review the city's art and determine which pieces have ties to racism and slavery, but hasn't asked to remove any.

Gov. Larry Hogan has called for the removal of the Roger B. Taney statue at the Maryland State House. In a statement Tuesday, Hogan said he believes removing the statue is the "right thing to do" and asked the State House Trust to "take that action immediately."

"While we cannot hide from our history -- nor should we -- the time has come to make clear the difference between properly acknowledging our past and glorifying the darkest chapters of our history," he said.

As chief justice, Taney wrote the US Supreme Court's majority opinion in the infamous Dred Scott decision shortly before the Civil War. The 1857 ruling found that slaves were not citizens of the United States and therefore were not protected under the US Constitution.

Dallas Mayor Mike Rawlings called for the formation of a task force Tuesday to determine the fate of Confederate statues in city parks during the next 90 days, including the Robert E. Lee statue in Lee Park and the Confederate War Memorial in downtown Dallas, CNN affiliate KTVT reported. "This is simple. We could remove them, the question is, how do we heal on this issue? To do that we have to talk and listen to one another," Rawlings said.

In San Antonio, two City Council members have pushed for the removal of a Confederate monument at Travis Park, CNN affiliate KSAT reported. Councilmen Roberto Treviño and William "Cruz" Shaw jointly filed a consideration to relocate the monument where it could be used in an "educational context."

Houston Mayor Sylvester Turner asked city staff to compile an inventory of Confederate statues and make recommendations about whether they should be removed from city property. Members of the public urged the council to take down the statues. "It is my hope that we can, in a very positive and constructive way, move forward," Turner said.

Officials in Richmond, the one-time capital of the Confederacy, have started to hold public meetings for community input on the future of the city's many Civil War monuments and statues. According to local reports, the first meeting was civil, with spirited debate on both sides. The city hopes to have a plan in place later this fall.

Seattle Mayor Ed Murray wants to remove a monument to Confederate soldiers in Lake View Cemetery. The cemetery is on private property, but Murray said in a statement that his office called the cemetery operator to express his concerns about the monument. Murray said the move would send a "strong message by taking these archaic symbols down."

"We must remove statues and flags that represent this country's abhorrent history of slavery and oppression based on the color of people's skin. It is the right thing to do," Murray's statement said.

Gov. Doug Ducey told CNN affiliate KTVK that he will not remove any Confederate monuments or memorials and will instead leave that decision up to the public.

"It's not my desire or mission to tear down any monuments or memorials. We have a public process for this. If the public wants to be engaged on this, I'd invite them to get engaged in it," Ducey said.

Officials with Gettysburg National Military Park said they have no plans to remove any of the park's 1,300-plus monuments, markers or plaques.

The Hollywood Forever Cemetery in Los Angeles removed a Confederate monument Wednesday morning, spokesman Theodore Hovey told CNN. The monument memorialized more than 30 Confederate veterans and their families who are buried in the cemetery. It was erected in 1925.

The Long Beach chapter of the United Daughters of the Confederacy, the owners of the monument, asked the cemetery to remove it after it was featured in an August 4 op-ed in the Los Angeles Times, Hovey said. A CNN request for comment from that group was not immediately answered. "It was a mutual decision on the part of the cemetery and the monument's owner that it is best for it to be removed," Hovey said. The graves around the monument were not affected, he said.

In San Diego, a Confederate marker commemorating the Jefferson Davis Highway was removed Wednesday, according to CNN affiliate KGTV. The marker was installed in Horton Plaza in 1927.

An online petition asking Mayor Kevin Faulconer, City Councilman Chris Ward and Scarlett Stahl, president of the California division of United Daughters of the Confederacy, to remove the monument was started earlier Wednesday. It had received more than 160 signatures by Thursday morning.

In a Facebook statement, Ward praised the decision to remove the marker, saying, "Monuments to bigotry have no place in San Diego."

A Confederate statue called "Old Joe" was removed Monday in Gainesville, Florida. The statue sat outside the Alachua County Administration Building for more than 100 years. The Alachua County Board of Commissioners made the decision to remove the statue in May after two years of debate. It will be relocated by the Daughters of the Confederacy.

The city was able to start the process to relocate the monuments after court rulings cleared the way following heated public debate and legal fights.

The Louisiana Legislature was considering a measure that would allow local governments to take down a war memorial only if voters approve the action at "an election held for that purpose."

The statue of former Chief Justice of the Supreme Court Justice Roger Taney was removed from the grounds of the Maryland State House in Annapolis early Friday morning, according to CNN affiliate WBAL.

Taney, the fifth Chief Justice of the Supreme Court, penned in 1857 the majority opinion in the Dred Scott decision declaring that slaves were not citizens of the United States and therefore were not protected under the US Constitution.

Maryland Gov. Larry Hogan had called for the statue's removal on Tuesday.

"While we cannot hide from our history -- nor should we -- the time has come to make clear the difference between properly acknowledging our past and glorifying the darkest chapters of our history," Hogan said in a statement.

The Confederate Memorial in St. Louis was removed in July after an agreement between the city and the Missouri Civil War Museum.

The museum agreed to pay for the monument's removal and storage until a permanent new location could be found. The museum must find a Civil War museum, battlefield, or cemetery outside St. Louis as the monument's new home, the city said.

Protesters toppled over a Confederate statue Monday in front of the old Durham County Courthouse. The monument depicted a soldier holding a gun and had an engraving that said "in memory of the boys who wore gray." The protest was held in response to the Charlottesville violence.