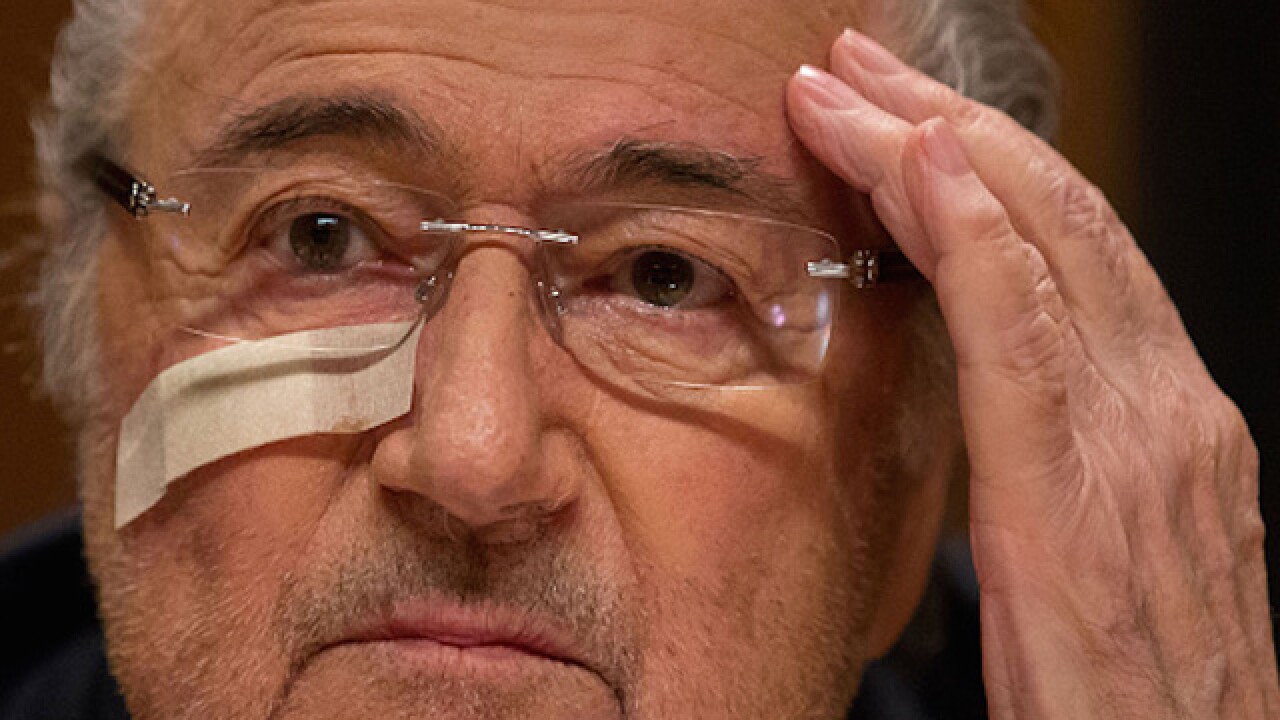 ZURICH (AP) — Sepp Blatter and Michel Platini had their bans from soccer reduced from eight years to six by FIFA's appeal body on Wednesday, two days before the sport's ruling body tries to turn the page on years of scandals by electing a new president.

Blatter and Platini were initially found guilty of wrongdoing by FIFA's independent ethics committee, which is led by a German judge, over a previously-secret 2011 financial transaction.

Platini, the UEFA president, said not being cleared was an "insulting decision, shameful and a denial of rights" - and announced he will appeal to the Court of Arbitration for Sport.

Blatter, as FIFA president, authorized a payment of 2 million Swiss francs ($2 million) to Platini which was found to be unethical and a conflict of interest.

But following hearings last week, an in-house appeal committee comprising members of federations voting in Friday's presidential election decided to relax the suspensions. The committee is headed by Larry Mussenden of Bermuda, who is currently campaigning to win a May vote to become president of CONCACAF and a FIFA vice president.

"The appeal committee considered that Mr. Platini's and Mr. Blatter's activities and the services they had rendered to FIFA, UEFA and football in general over the years should deserve appropriate recognition as a mitigating factor," FIFA said in a statement.

Blatter said in a statement that he was "deeply disappointed" with the verdict. Having hoped to be cleared in time to preside over the electoral congress on Friday, Blatter might have run out of time for an urgent CAS hearing.

Both Blatter and Platini have constantly denied wrongdoing and claimed they had a verbal deal for additional salary that former France great Platini would receive for working as Blatter's presidential adviser from 1999-2002.

Platini had been the leading candidate to succeed Blatter in FIFA's emergency election before the payment was revealed in September.

"The reasons given against me are baseless, trumped up and surreal, given the facts and explanations that I gave during the hearing of the appeals board," Platini said in a statement released through his legal team. "This decision is in reality a political decision taken by the FIFA administration."

He added: "I am the victim of a system that had only one goal: To prevent me from becoming FIFA president in order to protect certain interests that I was about to bring into question."

Platini said he would pursue all possible means to appeal, starting with CAS, and that he had asked his legal team to launch an appeal to the Lausanne-based court "without waiting."

Platini has previously said he asked for a salary of 1 million Swiss francs when approached in 1998 to work for the newly-elected Blatter.

Blatter said there was a contract for 300,000 Swiss francs, the same as FIFA's then secretary general in line with its salary structure, plus a "gentleman's agreement" to get the rest later.

Swiss law obliged FIFA only to pay the deferred money within five years. It was not until 2010 that Platini, by then UEFA president, reportedly asked for the balance, and was paid in February 2011.

That timing has raised suspicion as the payment came during a FIFA presidential election campaign. UEFA later urged its members to support Blatter — who promised them it would be his final term — against Mohamed bin Hammam of Qatar.

Blatter won that 2011 election unopposed after Bin Hammam was implicated in bribing Caribbean voters. From then on, Platini was the likely successor to lead FIFA.

Platini's provisional suspension by the ethics committee last October, pending a full investigation, stalled his presidential bid and the ban in December effectively ended it.

The Platini payment emerged during a wider Swiss federal investigation of FIFA business, including suspected money laundering in the 2018 and 2022 World Cup bidding contests.

Platini's status in the Swiss investigation is "between a witness and an accused person," Lauber has said.