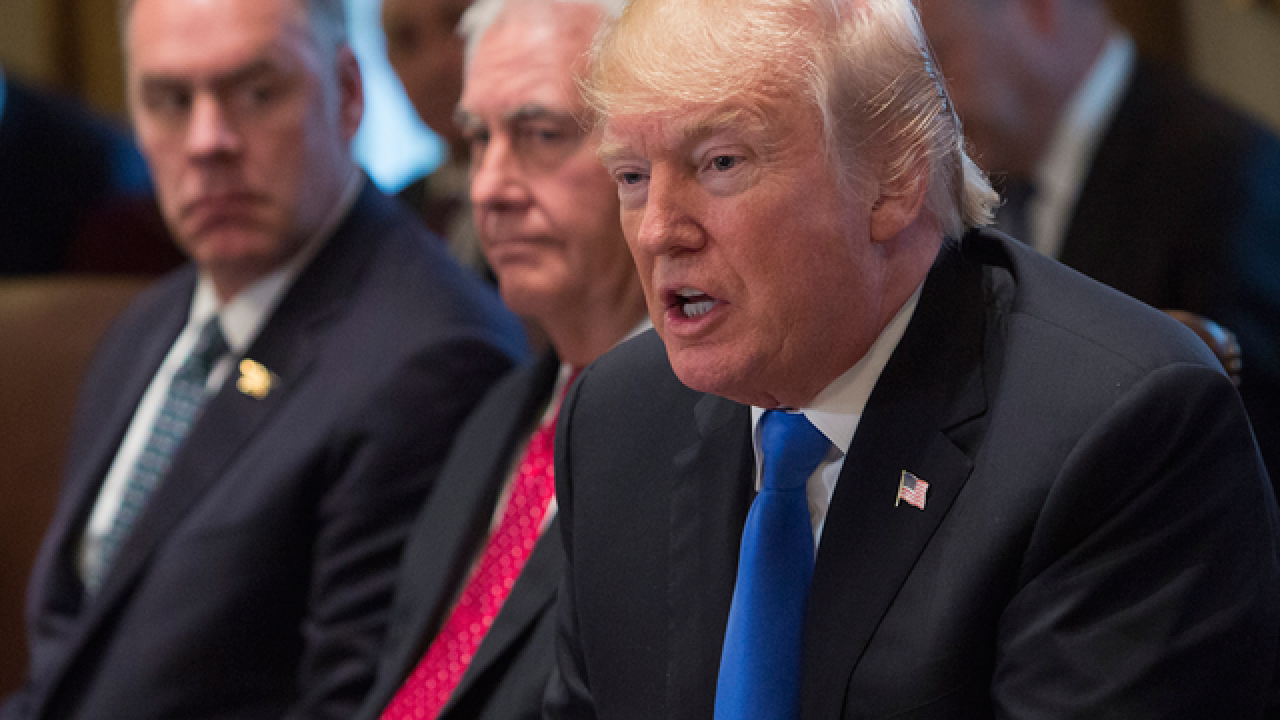 (CNN) -- President Donald Trump delivered a blistering and rambling monologue to the journalists he allowed into his Cabinet meeting for more than 70 minutes on Monday. His press secretary, Stephanie Grisham, later tweeted, "I hope we see honest reporting from today's mtg."

We can honestly tell you that Trump's remarks were highly dishonest.

We're still looking into some of the President's claims. We can report that at least 20 of them were false:

"But in the meantime, North Korea, I like Kim, he likes me. We get along. I respect him, he respects me. 'You could end up in a war.' President Obama told me that. He said, 'The biggest problem, I don't know how to solve it.' He told me he doesn't know how to solve it. I said, 'Did you ever call him?' 'No.' Actually, he tried 11 times. But the man on the other side, the gentleman on the other side, did not take his call. OK? Lack of respect. But he takes my call,'" Trump said.

Facts First: There is no apparent basis for the claim that Obama tried to call Kim Jong Un 11 times.

"This is a total fabrication. Trump is completely delusional, and it's scary," Susan Rice, who served as Obama's national security adviser, said on Twitter in response to our tweet of Trump's quote.

Trump has previously claimed that Obama begged Kim for a meeting, another assertion for which there is no evidence.

"If you remember, I didn't want to go into Iraq. I was a civilian, so I had no power over it. But I always was speaking against going into Iraq," Trump said.

Facts First: Trump did not publicly oppose the invasion of Iraq before it began. Trump was tentatively supportive of the war when radio host Howard Stern asked him in September 2002, "Are you for invading Iraq?" He responded: "Yeah, I guess so. I wish the first time it was done correctly." The day after the invasion in March 2003, he said, "It looks like a tremendous success from a military standpoint." Trump did not offer a definitive position on the looming war in a Fox News interview in January 2003, saying, "Either you attack or don't attack."

Trump started publicly questioning the war later in 2003, and he was an explicit opponent in an Esquire article published 17 months after the invasion. That is not the same as "I was against going to the war."

"But I give away my presidential salary. They say that no other president has done it. I'm surprised, to be honest with you. They actually say that George Washington may have been the only other president," Trump said.

Facts First: Trump does donate his salary, but the rest of his claim was inaccurate. He is not the only president to have donated the official salary; both John F. Kennedy and Herbert Hoover did so. Washington did not.

Although Washington initially declined his salary, he relented after Congress insisted.

Trump attacked critics who said that holding a G7 summit at one of his resorts would violate the Constitution. He said: "You people with this phony Emoluments Clause."

Facts First: There's nothing phony about the Constitution's prohibitions against the President receiving payments from foreign and domestic governments.

The clause on foreign emoluments, found in Article I, Section 9, says that "no person holding any office of profit or trust under them, shall, without the consent of the Congress, accept of any present, emolument, office, or title, of any kind whatever, from any king, prince, or foreign state."

The clause on domestic emoluments, found in Article II, Section 1, says: "The President shall, at stated times, receive for his services, a compensation, which shall neither be increased nor diminished during the period for which he shall have been elected, and he shall not receive within that period any other emolument from the United States, or any of them."

Trump might have been attempting to argue that it is phony to apply the clause to his own activities, but, at very least, his wording left an inaccurate impression.

The deal with Turkey

"People have been trying to make this deal for years," Trump said of his ceasefire agreement with Turkey.

Facts First: The President's claim is baseless to the point of being nonsensical. The deal is a narrow agreement specifically tied to the Turkish offensive that followed Trump's decision to withdraw US troops from a Kurdish-held region of northern Syria, not an agreement that resolves long-standing regional disputes. Further, Presidents Barack Obama and George W. Bush never sought to give Turkey anything like the concessionary terms of Trump's deal.

You can read a longer fact check here.

Facts First: The whistleblower's account of Trump's call with Ukrainian President Volodymyr Zelensky was largely accurate. In fact, the rough transcript released by Trump himself showed that the whistleblower's three primary allegations about the call were correct or very close to correct.

You can read a longer fact check here.

"The whistleblower had second- and third-hand information. You remember that, it was a big problem," Trump said.

Facts First: Some of the whistleblower's information came from others, but some did not. Michael Atkinson, the Trump-appointed inspector general for the intelligence community, noted that the whistleblower had "direct knowledge of certain alleged conduct."

Atkinson also explained that the whistleblower was "credible" even about events on which the whistleblower did not have firsthand knowledge, such as the call: "... although the Complainant's Letter acknowledged that the Complainant was not a direct witness to the President's July 25, 2019, telephone call with the Ukrainian President, the Inspector General of the Intelligence Community determined that other information obtained during the ICIG's preliminary review supported the Complainant's allegations."

Trump said, "... I released a transcription then by stenographers of the exact conversation I had."

Facts First: The document released by the White House explicitly says, on the first page, that it is not an exact transcript of the call.

"A Memorandum of a Telephone Conversation (TELCON) is not a verbatim transcript of a discussion. The text in this document records the notes and recollections of Situation Room Duty officers and NSC policy staff assigned to listen and memorialize the conversation in written form as the conversation takes place. A number of factors can affect the accuracy of the record, including poor telecommunications connections and variations in accent and/or interpretation," the document says.

The whistleblower being 'gone'

"You never hear, what happened to the whistleblower? They're gone, because they've been discredited," Trump said.

"The whistleblowers have not vanished," Bradley Moss, a colleague of Mark Zaid, a lawyer for the two whistleblowers, said on Twitter.

The whistleblower and Adam Schiff

Trump said, "So was there actually an informant? Maybe the informant was Schiff. It could be shifty Schiff. In my opinion it's possibly Schiff."

Trump said of the comments Schiff made about the Zelensky call at a committee hearing: "So he made up a lie, and I released -- they never thought that I'd do this -- I released a transcription done by stenographers of the exact conversation I had. And now the game was up."

Facts First: Schiff made his comments about Trump's call after the President released the rough transcript, not before. The White House issued the document on September 25. Schiff spoke at a House Intelligence Committee hearing on September 26.

The crowd in Dallas

Facts First: The American Airlines Center has a capacity of about 20,000. The El Paso Times reported a crowd of 18,500.

Trump paused mid-speech to ask the fire marshal to let more people in to fill empty space at floor level.

Trump claimed that about "at least" 20,000 supporters were outside the arena during his Dallas rally.

Facts First: Trump's estimate was way off, though it was lower than the "close to 30,000" he had claimed during the speech. "We didn't have 30K outside. Probably had upward of 5K outside," Dallas Police Department spokesman Sgt. Mitchell Warren told CNN in response to that previous Trump estimate.

"I haven't had an empty seat at a rally," Trump said.

Facts First: There have been empty seats at various Trump rallies, including a rally earlier this month in Minneapolis, a July rally in Greenville, North Carolina, an October 2018 rally in Houston and an April 2017 rally in Harrisburg, Pennsylvania, according to journalists on the scene.

While China's official figures are generally considered unreliable, there is no apparent basis for the "57 years" figure. (Trump has made clear that he knows that this is the reported figure, but he has repeatedly added additional years for no apparent reason.)

Who is paying the tariffs on China

Trump said the US is "taking in billions and billions of dollars in tariffs from China, and they're eating the tariffs."

Facts First: Americans make the actual tariff payments, and a bevy of economic studies has found that Americans are bearing the overwhelming majority of the tariff costs.

The length of the Syria mission

Trump said American troops were initially supposed to be in Syria for a mere "30 days."

Facts First: There was never any specific timeline for the US military's involvement in Syria, much less a timeline of only 30 days.

"There was never a 30-day timetable on the US presence in Syria," said Syria expert Steven Heydemann, a professor of government and director of the Middle East Studies program at Smith College. "The previous administration, and officials serving in this administration, have never offered a fixed timetable for the US mission. Official statements have emphasized that the presence of US forces would be short, limited in scope, and small. But beyond general comments along those lines, there has been no statement indicating it would end after 30 days."

The troops being withdrawn from Syria

Facts First: He is not bringing the troops back home, at least not at the moment.

Trump has announced that "United States troops coming out of Syria will now redeploy and remain in the region to monitor the situation and prevent a repeat of 2014, when the neglected threat of ISIS raged across Syria and Iraq." He has also announced that 1,800 more troops would be deployed to Saudi Arabia.

Trump conceded at the Cabinet meeting that the soldiers will be "sent, initially, to different parts," but he claimed that they would "ultimately" return to the US.

The size of Miami International Airport

Touting the benefits of his Doral resort, Trump said it is right next to Miami International Airport, "one of the biggest airports in the world -- some say it's the biggest."

Facts First: Miami International is certainly not the biggest airport in the world.

"You saw what happened in North Carolina: We picked up two seats that people didn't think we were going to pick up. That was two weeks ago," Trump said.

Both seats had previously been held by Republicans, so the party did not pick them up. (Trump might have just been speaking informally.)