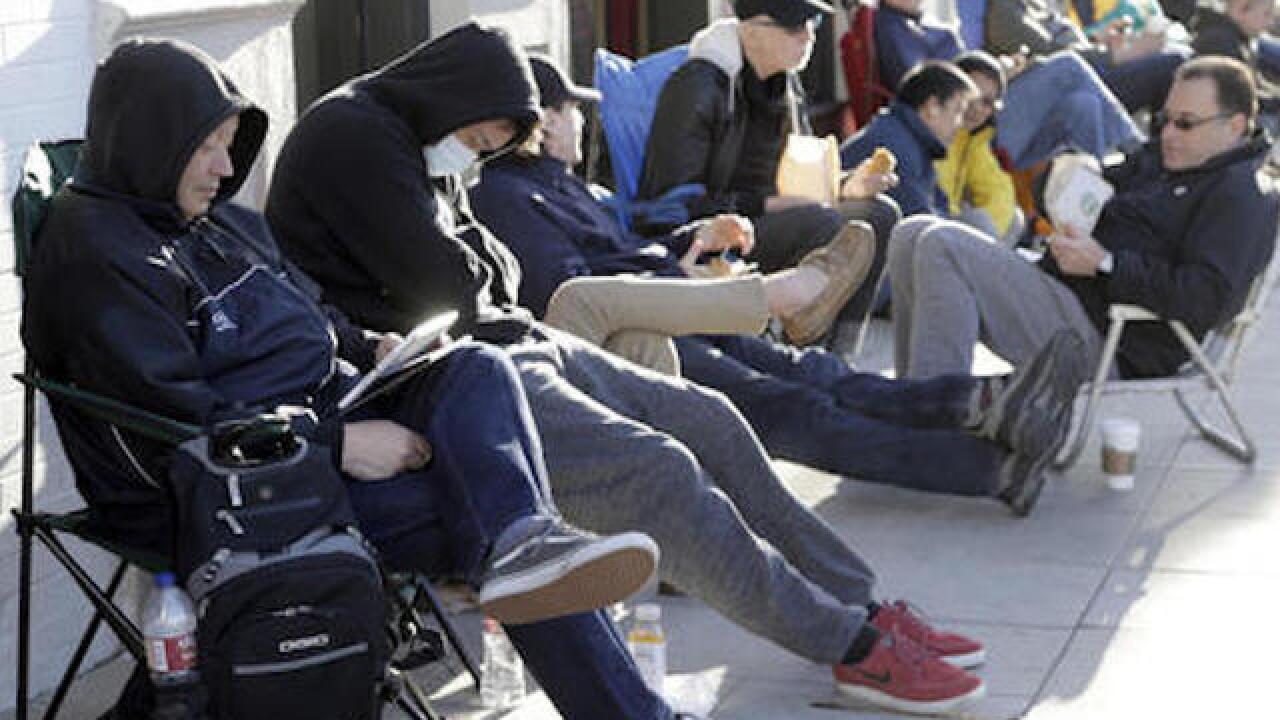 &lt;p&gt;Customers wait in line to be the first to sign a wait list to own the new Tesla vehicle at the Tesla showroom in Pasadena, Calif. Thursday, March 31, 2016. Tesla plans to unveil its Model 3 electric car Thursday night at its Los Angeles design studio. At a starting price of $35,000, before federal and state government incentives, the Model 3 is less than half the cost of Tesla's previous models. (AP Photo/Nick Ut)&lt;/p&gt;

DETROIT (AP) — The promise of an affordable electric car from Tesla Motors had hundreds of people lining up to reserve one.

Tesla planned to unveil its Model 3 Thursday night at its Los Angeles design studio. It doesn't go on sale until late 2017, but potential buyers could reserve one with a $1,000 deposit at Tesla stores starting Thursday morning.

Long lines, reminiscent of the crowds at Apple stores for early models of the iPhone, were reported from Hong Kong to Austin, Texas, to Washington.

At a starting price of $35,000 — before federal and state government incentives — the Model 3 is less than half the cost of Tesla's previous models. The car is expected to have a range of at least 200 miles when fully charged, about double what drivers get from competitors in its price range, such as the Nissan Leaf and BMW i3.

Robin Santucci got the sixth spot in line when he arrived at the Santa Monica, California, Tesla store at 3:45 a.m. Thursday. By 9 a.m., he estimated there were 200 people in line.

Santucci has admired Tesla for years. When he got his current car, an electric Fiat 500, he made sure the lease would run out at the end of 2017 so his next car could be the Model 3.

"The design of every other car they've put out is beautiful," said Santucci, who works in digital advertising and lives in West Hollywood.

Santucci added that he didn't want to wait too long to order a car because the federal tax credit of $7,500 will sunset once Tesla sells 200,000 vehicles in the U.S. That's likely several years away, but customers like Santucci want to be sure they qualify.

The Model 3 is the most serious test yet of 13-year-old Tesla's ability to go from a niche player to a full-fledged automaker. It could be the car that finally makes electrics mainstream — or customers could be scared off by Tesla's limited number of stores, chargers and service centers. Either way, the Model 3 is already changing the industry, spurring competitors to speed development of electric cars and improve their battery range.

Tesla didn't release details about the car before the event.

Right now, Tesla sells two vehicles: The Model S sedan, which starts at $71,000, and the Model X SUV, which starts around $80,000. But a lower-priced car has been a longtime goal of Tesla CEO Elon Musk. In a 2006 blog post, Musk said Tesla planned to build "a wide range of models, including affordably priced family cars" in order to speed the world toward a solar-powered future.

Here's what we know about the Model 3:

WHEN WILL IT GO ON SALE? Tesla has said it expects to start Model 3 production at its Fremont, California, factory at the end of 2017. But the company has a history of delays. The Model X, which went on sale last fall, was initially due to go on sale in early 2014. Musk said last month that the Model 3, unlike the Model X, is designed for "ease of manufacturing." Still, some analysts are doubtful. Morgan Stanley auto analyst Adam Jonas thinks Tesla won't start building the Model 3 until the end of 2018.

WHO ARE ITS COMPETITORS? General Motors is set to start selling the Chevrolet Bolt electric car at the end of this year, a full year before the Model 3. The Bolt will have a similar price tag and a 200-mile range. Hyundai's Ioniq, which has a 110-mile electric range and could match Tesla on price, goes on sale this fall. Audi will follow with an electric SUV in 2018. Musk said last month he's not worried. He thinks the Model 3 will compete most directly with small luxury cars like the Audi A4 and the BMW 3 Series.

HOW DID TESLA MAKE THE MODEL 3 LESS EXPENSIVE? Cheaper batteries. Tesla previously assembled its battery packs with battery cells made in Japan by Panasonic Corp. But Tesla and Panasonic are building a massive, $5 billion factory in Nevada which will supply batteries for the Model 3. Tesla says the scale of the factory will lower the cost of its battery packs by 30 percent.