Desperate to fill teacher shortages, US schools are hiring teachers from overseas 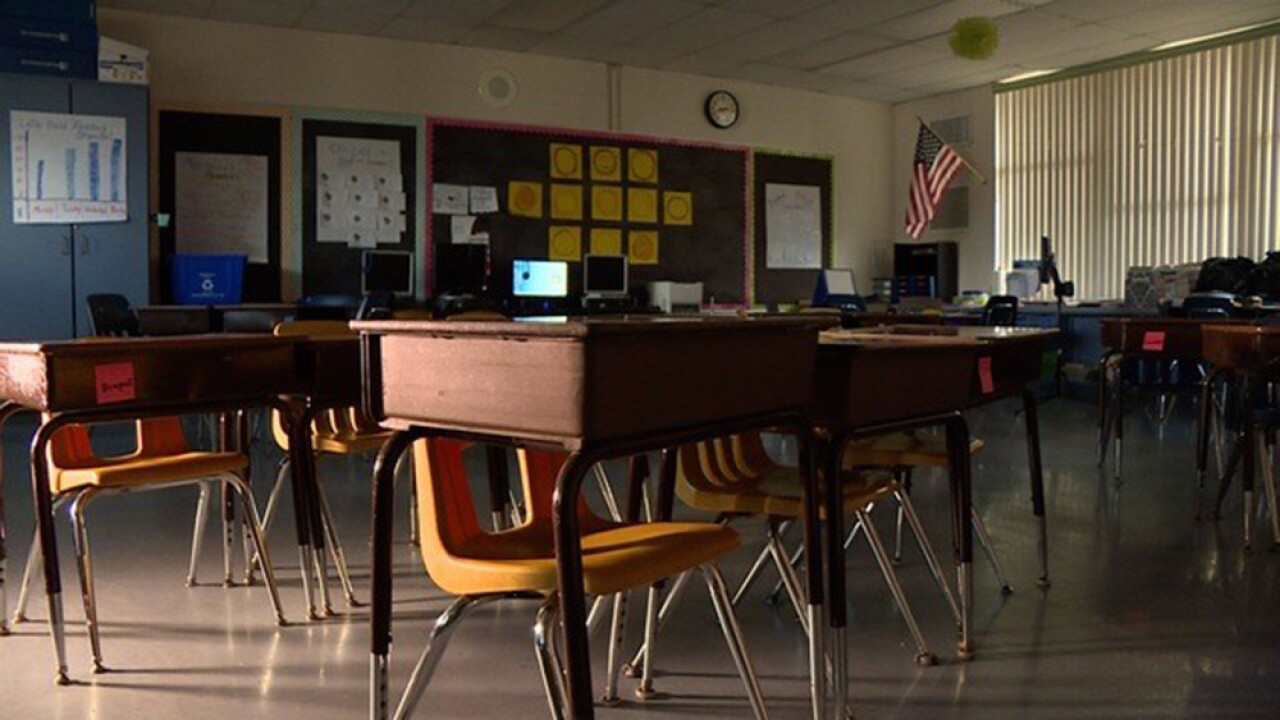 (CNN) -- When Joevie Alvarado became a teacher, she never expected to teach American students 7,600 miles away.

But a dire shortage of US teachers means some schools are taking drastic measures -- like hiring teachers from half a world away.

"For the first year, it's a little bit of a struggle because I'm the kind of person who misses family that easily," said Alvarado, who taught for a decade in the Philippines before moving to Arizona.

But "in terms of pay, let's just say my previous pay was multiplied by eight or 10 when I got here," she said. "So having that kind of pay, it enticed me to be here."

Some parents may be surprised to learn their children are now being taught by international teachers.

Tom Trigalet, who was principal at Casa Grand Union High School when Alvarado was hired, said there's not much choice.

"When you really don't have any other applicants, how are you going to fill those spots?" Trigalet said.

But hiring teachers from overseas is only a temporary fix to a widespread problem.

Across the US, schools are hemorrhaging teachers while fewer college graduates enter the profession.

In 2018, the US had an estimated shortage of 112,000 teachers, according to the Learning Policy Institute.

Some of those vacancies are filled by people who don't have a standard teaching certificate, he said. Others are being plugged by long-term substitutes, contracted agencies or teachers who must add an additional course to their day.

So schools like Casa Grande Union High have hired several Filipino teachers using J-1 visas. Those visas allow teachers to stay in the US for up to five years.

Alvarado is one of several Filipino teachers in their fourth year at Casa Grande teaching science -- a notoriously hard subject to fill with US teachers.

"People that have math and science degrees can make so much more money in research and in analytics and in other areas that their degree opens doors to," Thomas said.

While that salary may seem paltry for many Americans, Filipino teachers like Noel Que say their jobs in the US are much more lucrative, allowing them to live better.

"You can buy anything here -- not like back home," said Que, who teaches high school biology and biotechnology at Casa Grande

The Casa Grande Union High School District says its international teachers are on the same pay scale as its American-born teachers.

Que, like other Filipino teachers at his school, lives with roommates to cut down on expenses.

While teaching in America has brought financial rewards, there are also emotional costs.

Leaving his family behind

Que said he made the difficult decision to move from the Philippines to Arizona about four years ago.

"The economic condition in the Philippines is very different ... it's not really enough," he said.

"There is always a trade-off in everything that you want to get. I want this job (for) my family, and then the trade-off of that is I need to leave them there first."

But ultimately, Que said he made the right decision.

"I'm a family man, so it's like my responsibility to provide for my family, for my parents, also for my mom most especially," he said. "Half of my money goes back home and then half stays with me."

'We are not just certified, we are very qualified'

Que and Alvarado came to the US through one of several placement agencies that connects foreign teachers with American schools in need.

It's a booming business. In some cases, Filipino teachers pay an upfront fee, and the agency sets up the online interviews, tests and paperwork.

"The whole process just took two months for us to complete everything," Alvarado said.

Over the past decade, the number of Filipino teachers coming to the US to teach on J1 visas increased from 21 to almost 800, according to the US State Department.

But why do many Filipino teachers get selected to go to the US?

"Filipinos are very known to be patient and hardworking, and that's probably one of the reasons why mostly Filipinos are the participants of the J1 (visa) teacher program.," Alvarado said.

And unlike some teachers in the US who aren't certified in the subjects they teach, both Alvarado and Que have years of expertise in science.

It's a win-win scenario, Que said.

"It's a very good opportunity for the Filipinos to come here in America, to experience the life that we have here rather than the one that is being told to us or the one that we look at (in) the movies," he said.

"I think it is also beneficial for the state (where) the number of teachers are lacking, especially on subjects like science, math, special education, things like that," Que said.

"And they look into the Philippines, because many of our teachers are actually qualified on the subjects that they are teaching. ... We are not just certified, we are very qualified."

Learning to adapt in the US

When Que came to America, he experienced culture shock -- but in a good way.

"This is the first time that I notice that every person that you will pass by, they will ask you, 'How are you? Good morning!' Things like that," he said.

The cultural differences were obvious in the classroom, too.

"Our students in the Philippines [are] quite different from the students that we have here," Que said.

In the Philippines, "they are very disciplined in terms of education because they look into education as how they are going to escape poverty," he said. "Discipline-wise, we don't really have a problem."

Alvarado said she also noticed more of an initial challenge when some students pushed back.

"When I came, they were like ... 'Why do (you) have to make us do this, do that?" And I was like, 'Well my dear, I am here to teach you to make you learn. I am not just here to babysit all of you.' So that was part of my struggle, classroom management," Alvarado said.

"But slowly, I get the hang of it, and I was able to adjust it and show that hey, I'm the teacher, not you. What I say, you do," she said.

Alvarado now makes all her students sign a contract on classroom policies, including cell phone use and requiring everyone be seated and ready to learn before the tardy bell rings.

"You need to get the respect, and once you do that with them, it's easy to teach American kids," she said.

Alvarado said she loves hearing students tell her she's made a positive impact on their lives.

Marissa Yap, another Filipino teacher in Arizona, said she also had challenges with some students who weren't as well behaved as those she taught in the Philippines.

Despite her small frame, she commands attention in the classroom where she teaches chemistry and AP physics.

But the secret to making students behave isn't just about being strict. It's also about listening to students.

"I have observed that kids over the world ... they have common thing(s). They want to be listened to, and they want to be stay motivated and be interested," Yap said.

"Some of the kids are actually working (jobs), so in my case like when the student is sleepy, I just talk to her: 'So, how are you doing? So did you work last night?' "

The drowsy student responded: "I just arrived at home at 12 a.m."

That's when Yap turns the problem into a moment of positive reinforcement:

"So you're very sleepy, but you're still doing your work. I really appreciate that," she told the student.

Since then, "I have (had) no problem with her."

"Whenever I talk to the kid(s), they feel like a connection that I care for them, and I realize that's ... way back home, also the same time. It's actually just the same," Yap said.

"When you talk to the kid and you establish that good relationship, the kids will actually also give you the respect that you deserve."

Elizabeth Vitela said Yap has made a profound impact on her daughter, Genevieve, who was in Yap's chemistry class last year. On some days, the teacher stayed late to work with Genevieve until 6 p.m. or later.

"My daughter didn't know what she wanted to do. Because of (Yap), she's choosing science as something she wants to do for a career," Vitela said.

She said Yap "just has the passion and the love to teach kids ... to bring something out of them that they didn't even know they had."

The clock is ticking

Regardless of how much the Filipino teachers love their students, or how much student and school districts love them, everyone knows their time in the US is limited.

Yap, Alvarado and Que all have less than two years before their visas expire.

Alvarado said some of her students know she has to go back to the Philippines. They make it a point to tell her how grateful they are.

"It makes me feel so good when they would say, 'Miss I am very happy that you are one of my teachers because I've learned a lot from you.' " Alvarado said.

"When it comes to that point, when they would say thank you, it's a reward to myself that I have touched probably some lives of these people. But it's just so sad that we have to say goodbye."

Vitela, whose daughter didn't know what she wanted to do before she met Yap, started crying when she learned the Filipino teachers at Genevieve's school had to leave in two years.

"I think we need to change that," Vitela said. "Seriously."

"Because if you don't change that ... we're going to be doomed with education here in Arizona."