To-go drinks an elixir for public, a lifeline for business 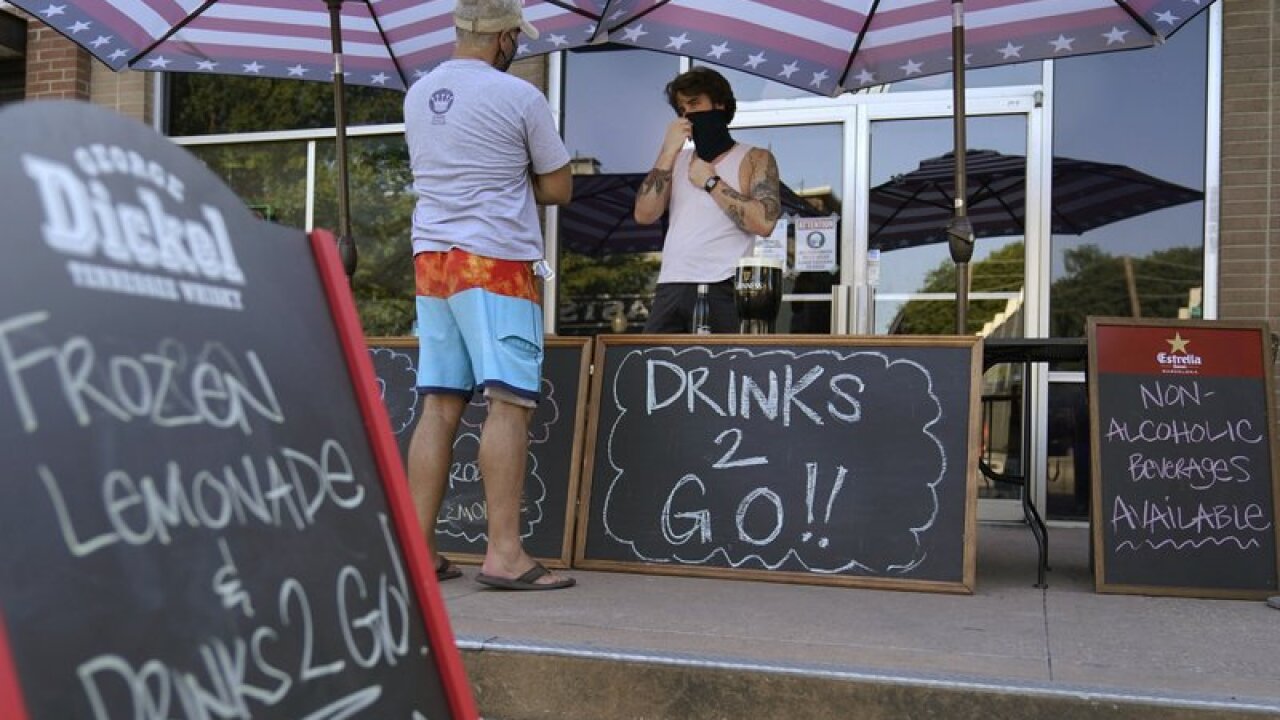 The coronavirus is shaking up America’s liquor laws.

At least 33 states and the District of Columbia are temporarily allowing cocktails to-go during the pandemic. Only two — Florida and Mississippi — allowed them on a limited basis before coronavirus struck, according to the Distilled Spirits Council of the United States.

Julia Momose closed Kumiko, her Japanese-style cocktail bar in Chicago, on March 16. The next day, Illinois allowed bars and restaurants to start selling unopened bottles of beer, wine and liquor, but mixed drinks were excluded.

Momose spent the next three months collecting petition signatures and pressing lawmakers to allow carryout cocktails. It worked. On June 17, she poured her first to-go drink: a Seaflower, made with gin, vermouth, Japanese citrus fruit and fermented chili paste. A carryout bottle, which serves two, costs $32.

Momose has been able to hire back four of her furloughed employees. A group she co-founded, Cocktails for Hope, is now helping restaurants buy glass bottles in bulk for carryout.

“Part of getting cocktails to go approved was embracing the fact that this isn’t going to fix everything, but it is going to fix something,” Momose said. “All these little things that we do will keep us open and keep our staff employed.”

U.S. liquor laws — many of which date to the end of Prohibition in 1933 —are a confusing jumble that vary by state, city and county.

Carryout cocktail regulations — which were passed starting in March — only deepen that confusion. Lawmakers approved carryout cocktails in some states; governors approved them in others. Nevada passed no statewide measure, but individual cities like Las Vegas and Reno allow them. In Pennsylvania, only restaurants and bars that lost 25% of average monthly total sales can sell cocktails to go.

Most carryout cocktail regulations require customers to buy food with their mixed drinks. Lids or seals are generally required, but some states say drinks also need to be transported in the trunk. Marbet Lewis, a founding partner at Spiritus Law in Miami who specializes in the alcohol industry, says IDs should be checked — online or in person — by restaurants and bars as well as by delivery drivers.

Some states, like Arizona, allow third party delivery companies like DoorDash to deliver cocktails; Kansas only allows delivery within a 50-foot radius.

The laws also have different sunset dates. Alabama is only allowing carryout cocktails through Sept. 15, while Colorado and Massachusetts have extended them into next year. Michigan is allowing them through 2025.

Last month, Iowa became the first state to permanently allow carryout and delivery of cocktails. Lawmakers in Ohio and Oklahoma are considering a similar measure, and the governors of Texas and Florida have expressed support for the change.

There is overwhelming public support for making cocktails to go permanent, says Mike Whatley, vice president of state and local affairs for the National Restaurant Association. Between 75% and 80% of respondents have said they support carryout cocktails in numerous state polls, Whatley said.

But some are urging states not to be too hasty. Mothers Against Drunk Driving worries that permanent carryout cocktails will lead to an increase in drunken driving unless laws make clear that the drinks can’t be consumed until the buyer is in a safe location.

The U.S. government hasn’t released preliminary drunk driving data for 2020. But Jonathan Adkins, the executive director of the Governors Highway Safety Association, said there’s no anecdotal evidence that drunk driving has spiked during the pandemic.

Patrick Maroney, a former liquor control officer in Colorado who is now a consultant, said carryout beer and wine — which was allowed in around 15 states prior to the pandemic — are different from cocktails because the containers are sealed by the manufacturer and the alcohol content is lower. Cocktails are mixed at the bar, so the alcohol content can vary and they may not be properly sealed, he said.

Maroney said states need to make sure police and health officials are consulted before changing laws that have worked for decades. He noted that California reported a spike in reports of alcohol delivery to minors in April.

“Are law enforcement officials worried about an ‘open air’ type atmosphere?” he said. “Is the law restricted to at-home consumption? How do they enforce it?”

Maroney received funding from the Center for Alcohol Policy — which is funded by beer wholesalers — for a recent research paper raising concerns about carryout cocktails.

Even before the coronavirus hit, there was a push to modernize alcohol laws to reflect the growing popularity of food delivery, Lewis said. She thinks lawmakers will have a hard time reinstating bans on carryout cocktails once the pandemic eases.

“Once you get the genie out of the bottle and there hasn’t been a problem, how do you get it back in?” she said.

Still, restaurant and bar owners say they’re not worried that patrons will get so used to carryout that they’ll stop going out even after the coronavirus has passed.

“I think that people are social. People enjoy the bar experience and like being waited on,” said Dave Kwiatkowski, who owns the Sugar House cocktail bar in Detroit, which closed March 15 but was able to reopen July 10 for carryout service.

Kwiatkowski normally employs a staff of 16. For now, it’s just him at the door and a bartender making drinks.

“It’s enough to pay the electricity and the insurance, and it’s nice to give at least a couple of people some jobs,” he said.

Kwiatkowski does wonder how he’ll handle carryout demand once the pandemic has ended and there’s a crowd in the bar on a Saturday night. But that will be a good problem to have, he said. He wants carryout cocktails to be permanently legalized.

“I think this is probably going to change how we do business forever,” he said.