We hear about this all the time: someone falls in love and pays for a puppy they spotted on a supposed breeder's website, only to find out that puppy doesn’t exist and their money is long gone. 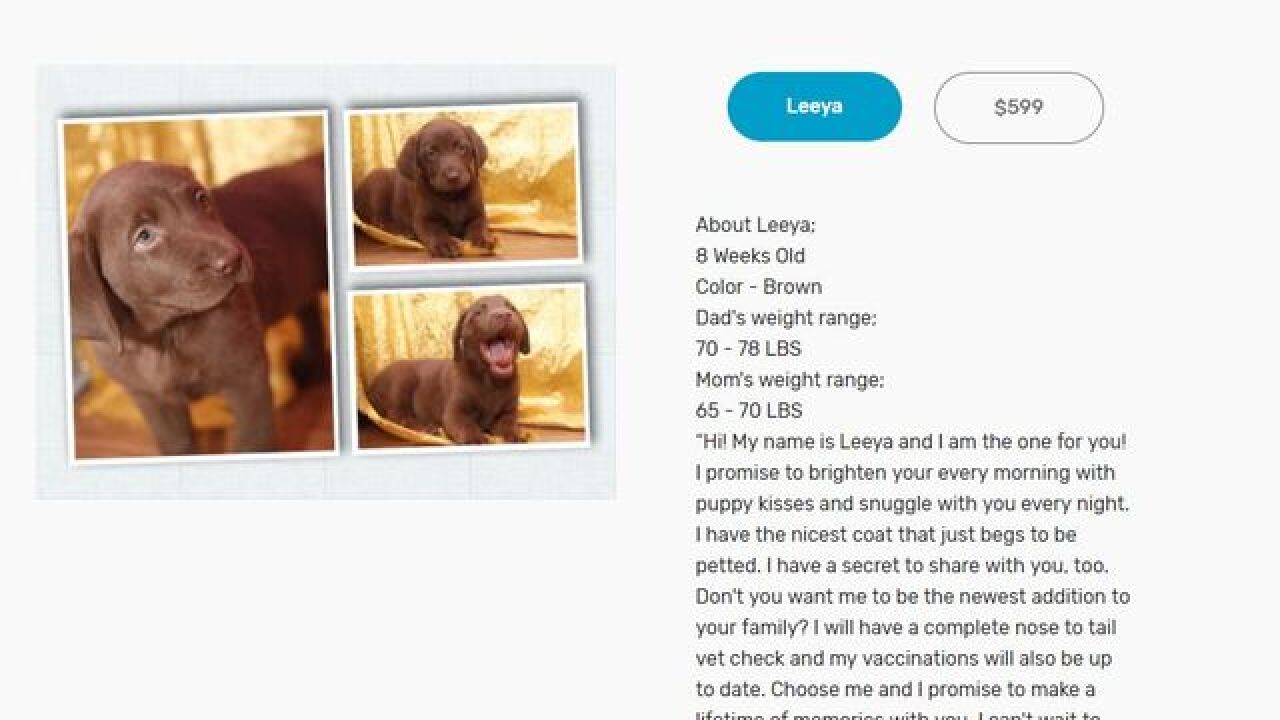 BROOMFIELD, Colo. -- Scripps station KMGH in Denver spoke to a heartbroken Broomfield family who was scammed out of a lot of money and who is sharing their story in the hope no one else falls victim to the same scam.

"As soon as I saw Leeya's face, I thought for sure this puppy grabs your heart."

But when Terry saw 9-week-old adorable Leeya on GreatRetrievers.com, he knew she was the one.

"I'd really like a purebred 'cause I’d like to do some pheasant hunting as I get closer to retirement,” said Terry.

The breeder appeared to be based in Texas and listed the lab at a reasonable price tag: $599. The breeder even offered free shipping, immunizations, guaranteed health record and was ready to go.

Terry paid the amount two weeks ago and is still waiting for Leeya. He can’t seem to reach the breeder anymore by phone, but still receives the random excuse via email, explaining the missed shipping date.

"Just couldn't get this puppy on the airplane. Things weren't going right," said Terry as he recounted the last excuse he was given.

Bre wanted to be sure about the scam and pretended to be someone else interested in Leeya.

"When I'm on the phone with the guy and he's telling me that Leeya is still available, it took everything in me not to just break down and cry," said Bre.

KMGH tried calling multiple times and did not reach anyone, nor a recorded voicemail associated with the breeder.

We started digging into the testimonials on the breeder website too.

A photo of a little girl in a hospital bed with a caption from her mother, about how helpful the golden retriever was to her daughter stricken with cancer, is actually ripped from an AP article. The picture is of a little girl with cancer but the girl is located in Ecuador, and that dog... well, it’s actually a cocker spaniel.

Unless there's a good explanation, it seems like Leeya might not make it to Colorado, so Bre and Terry are sharing their story.

"It was so hard to see my dad get his heart broken like that and I just thought if there was anything that would help this from happening to anyone else, I would do it. I don't want them to do this to another family," said Bre.

For more information about the Pet Animal Care Facilities Act under the Colorado Department of Agriculture, visit PACFA where you can file a complaint if you suspect someone is posing as a breeder.

Also, any person operating as a breeder must register and be licensed with the USDA. For a full list of licensed breeders across the country, visit this USDA link.