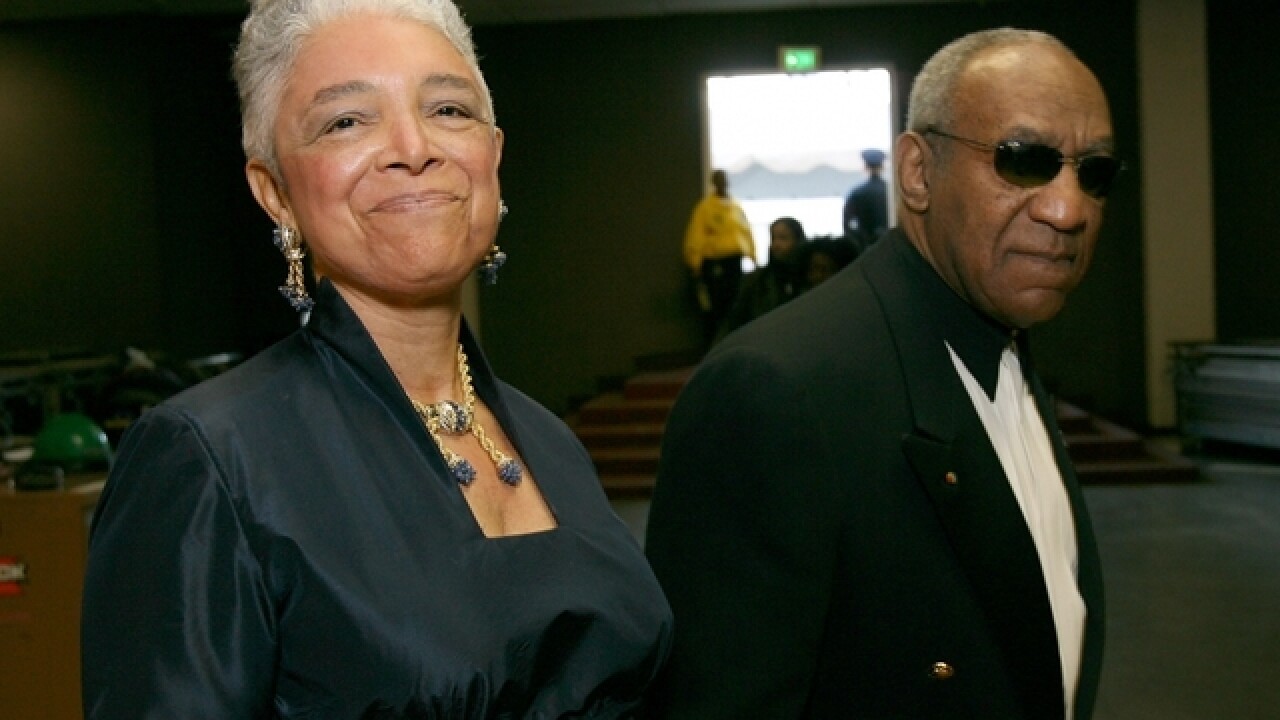 BOSTON (AP) — The wife of Bill Cosby said she never read a deposition in which her husband acknowledged he gave sedatives to women he was planning to have sex with, according to an excerpt of her testimony in a defamation lawsuit against her husband.
Camille Cosby testified last month in the civil case filed in federal court in Massachusetts by seven women who claim he sexually assaulted them decades ago. The women allege the actor-comedian defamed them when his representatives branded them as liars after they went public with their allegations.
An excerpt of Camille Cosby's deposition was attached to a court filing Monday by Bill Cosby's lawyers seeking to suspend the defamation case while a criminal case is pending against him in Pennsylvania. In that case, Cosby is charged with sexually assaulting former Temple University employee Andrea Constand.
In the Constand case, Cosby acknowledged in a 2005 deposition, made public last year, that he gave quaaludes to at least one woman and unidentified others he wanted to have sex with.
Camille Cosby says in her testimony in February that she and her husband discussed his deposition in the Constand case, but she wouldn't say specifically what they discussed about it. A U.S. District Court judge in Massachusetts had ruled that she could refuse to answer questions that call for testimony prohibited by the Massachusetts marital disqualification rule, which generally prohibits spouses from testifying about private marital conversations.
In the February deposition excerpt, Camille Cosby says she learned of Constand's allegations through her husband. The back-and-forth between Camille Cosby's lawyers and a lawyer for the seven women, Joseph Cammarata, became combative when Camille Cosby referred to private conversations she had with her husband.
When Cammarata asked her whether she had a discussion with her husband about the substance of his deposition testimony in the Constand case, Camille Cosby replies: "That is just communication between my husband and me."
After her lawyer advises her that she can answer "yes" or "no" whether she's discussed it without divulging any of what was said, Camille Cosby answers, "Yes," saying she did discuss his deposition testimony with him.
The seven women who brought the defamation lawsuit are among about 50 women who have accused Cosby of sexual misconduct. He has denied their allegations.
Cosby, 78, has pleaded not guilty in the Pennsylvania case, the only criminal case against him.
Through a spokesman, lawyers for Bill and Camille Cosby declined to comment on Camille Cosby's deposition. Cammarata also declined to comment.
Copyright 2016 The Associated Press. All rights reserved. This material may not be published, broadcast, rewritten or redistributed.