A timeline of how the Pittsburgh synagogue shooting unfolded 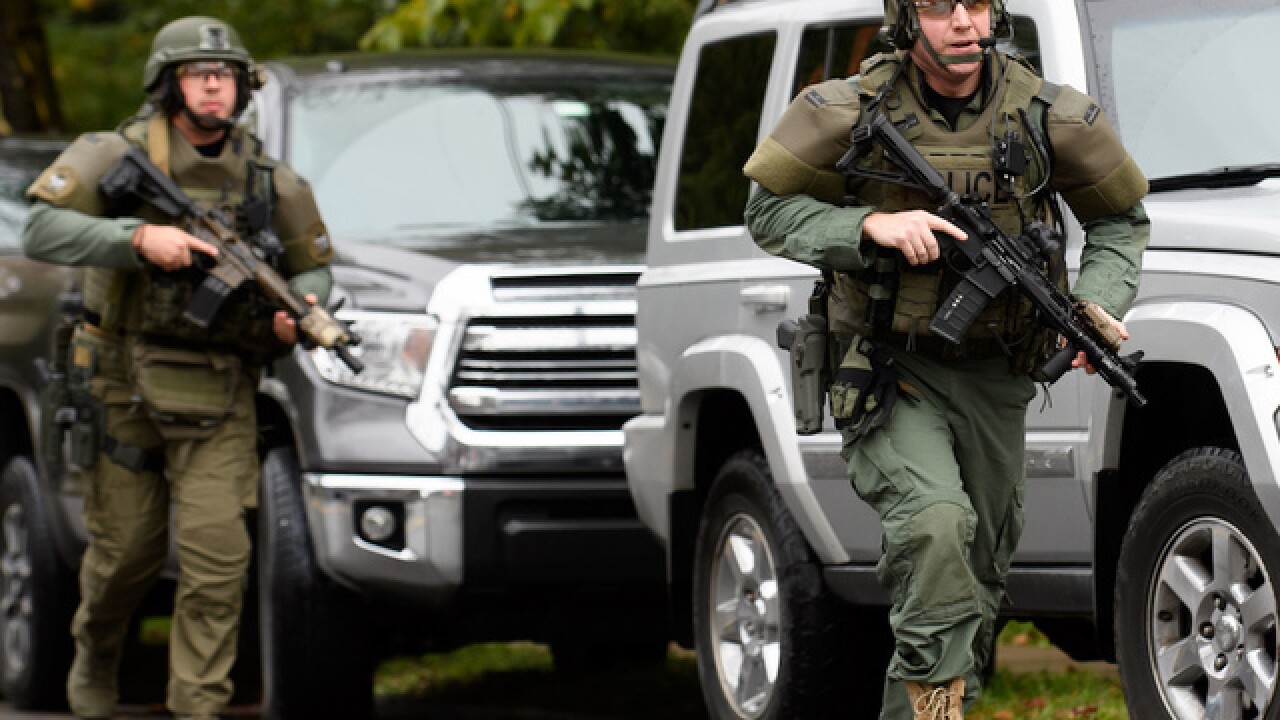 Image copyright 2018 Getty Images. All rights reserved. This material may not be published, broadcast, rewritten, or redistributed.
&lt;p&gt;Police rapid response team members respond to the site of a mass shooting at the Tree of Life Synagogue in the Squirrel Hill neighborhood on October 27, 2018 in Pittsburgh, Pennsylvania. &lt;/p&gt;

Police who rushed to a Pittsburgh synagogue where 11 people were killed were soon met with a string of gunfire, according to radio transmissions from the scene.

When the shooting stopped, officers waited for tactical teams to arrive then searched the building until the shooter, hiding on the third floor, fired at them.

Eventually the gunman gave up and crawled out, apparently explaining his motive to one officer, who reported the shooter said: "All these Jews need to die."

Here is how the shooting and police response unfolded:

9:49 a.m. ET: An anti-Jewish message is posted on a social media account for Robert Bowers, identified as the alleged gunman. "I can't sit by and watch my people get slaughtered," he said. "Screw your optics, I'm going in."

9:55 a.m. ET: Two police cars are dispatched, according to radio traffic posted by Broadcastify. They are told one caller reports 20 to 30 shots heard from the lobby. Numerous other officers say they are responding.

About four minutes later: An officer identifies himself by number and says he is on the perimeter. "We're under fire. He's got an automatic weapon and firing at us from the synagogue."

Just after 10 a.m. ET: An officer says, "Every unit in the city needs to get here now." Dispatcher relays request to all available units.

About 10:11 a.m. ET: There is a discussion among officers about going into the synagogue. One says there has been no gunfire since officers initially arrived. "Once we have the resources here, we should consider (going in)."

10:19 a.m. ET: A worker at the emergency operations center said 911 calls indicated the shooter came into the lobby and began firing. People ran and were hiding in the building.

10:21 a.m. ET: Someone says an officer fired at the suspect during the initial gunfight and believes the gunman may have been hit.

10:25 a.m. ET: Officer says suspect is wearing green vest or green jacket with a weapon slung around his neck.

A few minutes later: There is talk about evacuating people and providing patrol officers at the front door to cover their exits.

An officer describes finding a spent magazine from a Kalashnikov rifle in the hallway.

10:33 a.m. ET: The suspect is described as a tall white male, short hair, light blue shirt and jeans. A few minutes later another officer adds that someone who had been hiding says the suspect is unshaven, is heavy set and has on a coat.

10:36 a.m. ET: A tactical officer describes finding four bodies in the atrium. Another person is alive.

10:41 a.m. ET: One victim, who has a tourniquet, is brought out to a waiting armored vehicle called a BearCat.

10:43 a.m. ET: Tactical teams rescue two more people from the basement. Someone mentions there is still no contact with the suspect.

About 10:53 a.m. ET: Shots are heard on the radio. "Contact! Contact! Shots fired! Shots fired!" an officer shouts. An officer says there is a man barricaded on the third floor, firing at them. An officer is shot, according to radio traffic.

11:03 a.m. ET: Police tell each other there are negotiations with the gunman. "He's been given orders to crawl out. He's not done so yet." Police say he has an AR-15 and a handgun. They later find two more handguns, according to scanner traffic.

11:04 a.m. ET: Suspect puts his hands in view. A few minutes later, he gives police his name and age.

11:08 a.m. ET: Officer calls for radio silence because suspect is surrendering and crawling out of the room he was hiding in. Suspect is said to be injured. According to an officer on the radio, he tells police "All these Jews need to die."