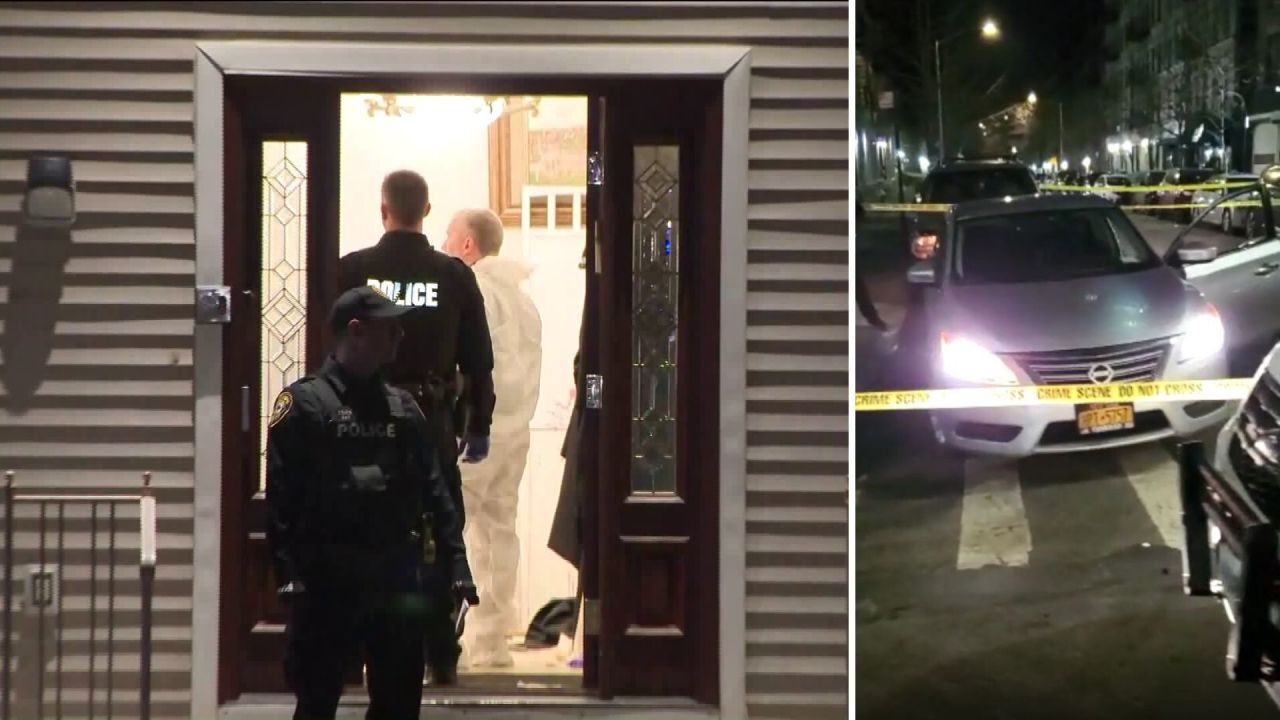 The suspect in a string of stabbings during a Hanukkah celebration at a rabbi's Monsey, New York, home was found with "blood all over him," a law enforcement source with direct knowledge of the case told CNN on Sunday.

Grafton Thomas was driving a Nissan Sentra across the George Washington Bridge into New York City when his car's tag was captured by a license plate reader at about 11:45 p.m. Saturday, authorities said.

Ramapo officers picked him up and transported him upstate, the spokeswoman said. Monsey is a hamlet within Ramapo.

Thomas, who is from Greenwood Lake, about a 40-minute drive northwest of Monsey, was arraigned Sunday on five counts of attempted murder and one count of first-degree burglary, Ramapo Police Chief Brad Weidel told reporters.

Wearing a white jumpsuit, Thomas was led into the courtroom in handcuffs. He kept his eyes on the floor and said nothing audible during the proceeding, speaking only to his attorney. A group of Orthodox Jews watched the hearing from the gallery.

Thomas entered a not guilty plea. His next court appearance is Friday.

During arguments over bail, Rockland County Senior District Attorney Michael Dugandzic said Thomas had no ties to the community. The prosecutor also said one of the victims has a skull fracture and that when police stopped Thomas he had blood on his clothes and smelled strongly of bleach.

Public defender Kristine Ciganek argued her client had no criminal history and lived with his mother. He has been arrested twice, she said (Dugandzic said the defendant had been arrested earlier in the year for menacing and reckless endangerment, and the outcome of those charges was not immediately clear).

Judge Rhoda Schoenberger set bail at $5 million and said, if released, Thomas must forfeit any firearms he owns and stay away from the alleged victims and the rabbi's Monsey home.

The anti-Semitic attack in Monsey, New York, on the 7th night of Hanukkah last night is horrific. We must all come together to fight, confront, and eradicate the evil scourge of anti-Semitism. Melania and I wish the victims a quick and full recovery.

Five people were taken to area hospitals after the suspect entered the Hanukkah celebration in the New York suburb and began stabbing people, according to police and witnesses.

One of the victims was the son of Rabbi Chaim Rottenberg, at whose home the attack unfolded, and another victim suffered head wounds and is in serious conditions, Gov. Andrew Cuomo said. The rabbi's son is recovering, he said.

The attacker pulled out a knife that was "almost like a broomstick," said Aron Kohn, who attended the Hanukkah celebration.

The suspect tried to run into a nearby synagogue, but someone closed the doors, Kohn added.

Rockland County -- where the stabbing took place -- has the largest Jewish population per capita of any US county, according to New York state . About 90,000 residents, almost a third of the county's population, are Jewish, Weidel said.

There were at least 100 people in the home at the time, as the rabbi was "lighting the candle" on the seventh night of Hanukkah, Kohn said.

The suspect tried to run into a nearby synagogue, but someone closed the doors, Kohn added.

So many Jewish families in our city have close ties to Monsey. We cannot overstate the fear people are feeling right now.

I’ve spoken to longtime friends who, for the first time in their lives, are fearful to show outward signs of their Jewish faith. https://t.co/KUUHlu6guY

A latest in a string of attacks

Saturday's stabbing is the 13th act of anti-Semitism in the state in the past three weeks, Cuomo told reporters. That's in addition to other hateful incidents targeting the black, Latino and LGBT communities, he said.

David Harris, CEO of the American Jewish Committee, a Jewish advocacy organization, said there are several possible explanations for the spate of anti-Semitic attacks.

"The legacy of the Holocaust is kind of fading. Survivors like my own mother and father are no longer here," Harris told CNN. "So, the impact of what anti-Semitism can become is largely unknown to many younger people."

He said he believes there is "a growing lack of confidence in liberal democracy, in the kind of societies that we've built.

"Rather than coming together, we're fracturing and we're Balkanizing," Harris said.

I am horrified by the stabbing of multiple people at a synagogue in Rockland County tonight.

We have zero tolerance for anti-Semitism in NY and we will hold the attacker accountable to the fullest extent of the law.

The attacks are symptoms of "an American cancer that is spreading in the body politic," the governor said. He vowed to propose a law that would make New York the first state to treat these types of incidents as domestic terrorism.

"They're trying to inflict fear. They're motivated by hate. They are doing mass attacks," Cuomo said. "These are terrorists in our country perpetrating terrorism on other Americans, and that's how we should treat it and that's how I want the laws in this state to treat it."

He directed the state's Hate Crimes Task Force to investigate the incident. The Anti-Defamation League of New York traveled to the scene to learn more and coordinate with law enforcement, the group said.

Police will increase visits to houses of worship and "other critical areas in the community," he said. Meanwhile, Cuomo has instructed New York State Police "to increase patrols and security in Orthodox Jewish neighborhoods across New York state," he said Sunday.

So many Jewish families in our city have close ties to Monsey. We cannot overstate the fear people are feeling right now.

I’ve spoken to longtime friends who, for the first time in their lives, are fearful to show outward signs of their Jewish faith. https://t.co/KUUHlu6guY

'There's a fear of retaliation'

The ADL will work with leaders in Orthodox and Hasidic communities to improve their reporting mechanisms, Bernstein said.

"There's a fear of reporting. There's a fear of retaliation, or they just don't have the understanding of how to report," he told CNN. "So what happens is in a place like here in Rockland County, you maybe will only show a few or handful of incidents that have taken place ... when in reality -- we believe, based in our conversations with Orthodox leadership -- there's far more of that happening."

"We are outraged because the answer is clear: the Jewish community NEEDS greater protection," Greenblatt tweeted , demanding more protection for Jewish communities and consequences for the perpetrators of the attacks. "Whether worshiping in synagogue, shopping in the supermarket or celebrating at home, Jews should be safe from violence."