5 killed, around 60 injured in massive pileup on Pennsylvania turnpike 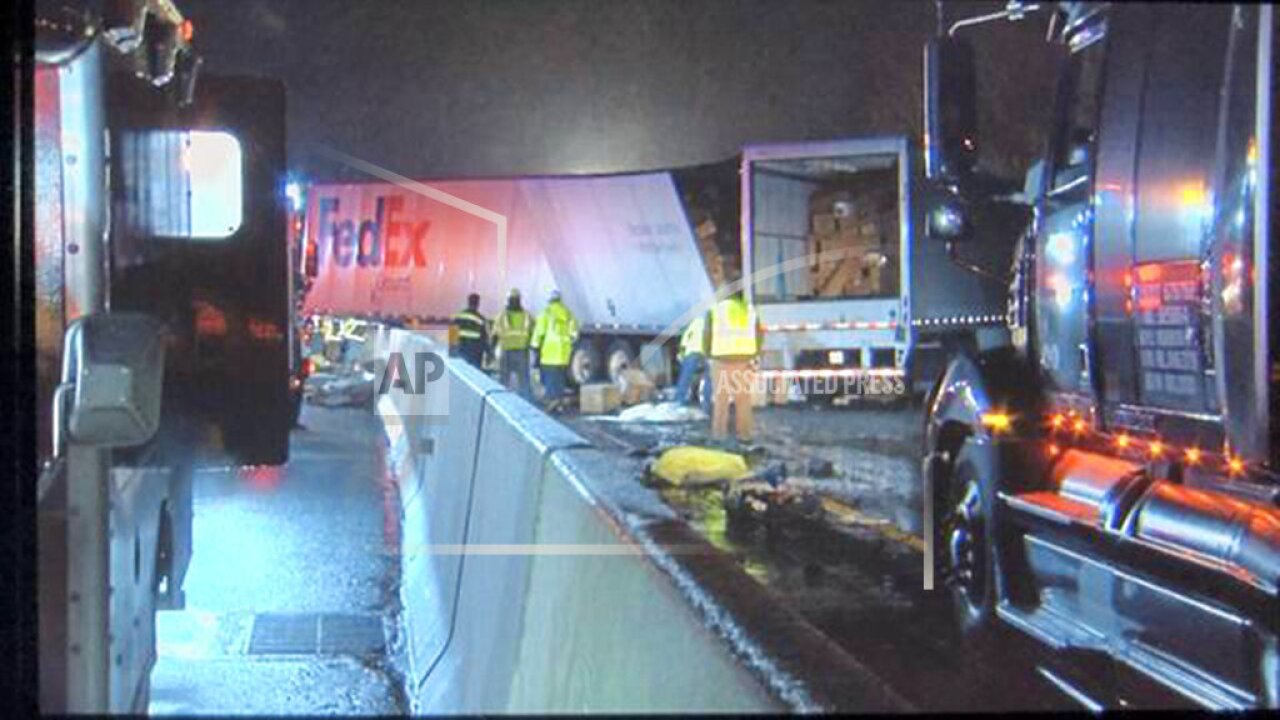 GREENSBURG, Pa. — A deadly crash involving a passenger bus and multiple other vehicles on the Pennsylvania Turnpike left at least five dead and dozens injured early Sunday, shutting down a large portion of the highway.

Officials said at least 60 people, ranging in age from 7 to 52 years old, were hospitalized with unknown injuries after the crash that happened at 3:40 a.m. in Westmoreland County, around 30 miles (50 kilometers) east of Pittsburgh. Photos from the scene show a mangled collision of multiple vehicles including an overturned bus, two tractor-trailers, passenger cars and a smashed FedEx truck that left packages sprawled along the highway.

The images appear to show the bus is an Ohio Coach vehicle. The company runs an express bus service that travels between New York City, Ohio and Kentucky, according to its website. Messages were left with the company seeking comment.

FedEx did not provide any other details besides that they are cooperating with authorities.

There were 25 victims transported to Excela Frick Hospital in Mt. Pleasant, Excela Health spokeswoman Robin Jennings said. Nine of those patients are under the age of 18.

At least one of the 25 victims initially sent to Excela was transported to a nearby trauma center and the rest of the patients’ conditions were not known, Jennings said.

Information about what caused the accident was not immediately available, and the National Transportation Safety Board investigators were called to the scene. The National Weather Service forecast for Westmoreland County early Sunday listed light unknown precipitation and an air temperature just below freezing.

Pennsylvania Turnpike spokesman Carl DeFebo said it was “premature” to say if weather was a factor in the crash. He added that a portion of the turnpike will likely be closed for the rest of the day, DeFebo said.

See the closed portion of the Turnpike below.

The Tribune-Review reported that Angela Maynard, a tractor-trailer driver from Kentucky, said the roads were wet from snow but not especially icy. Maynard was traveling eastbound on the turnpike when she came upon the crash site and called 911.

“It was horrible,” she told the newspaper. She saw lots of smoke but no fire. She and her co-driver found one person trapped in their truck and another lying on the ground.

“I tried to keep him occupied, keep talking, until medical help arrived,” Maynard said. “He was in bad shape. He was floating in and out of consciousness.”