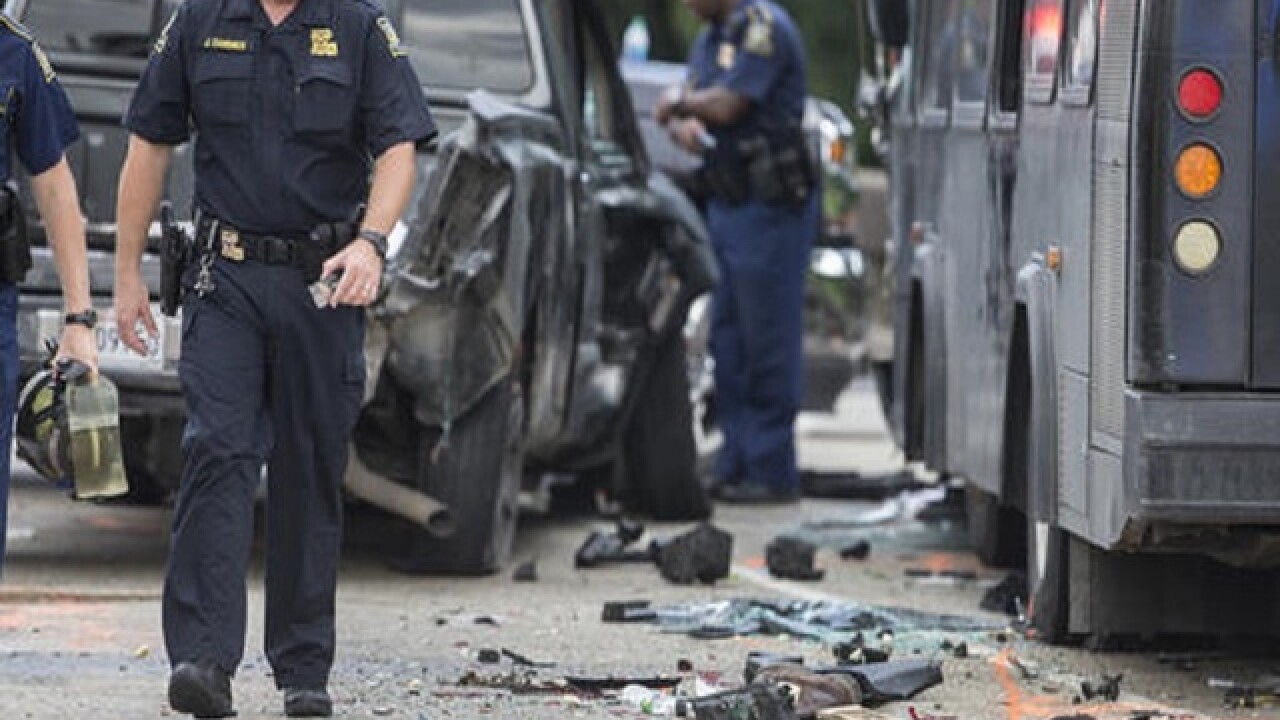 &lt;p&gt;Police investigate the scene of a fatal wreck involving a bus and several cars on Interstate 10 near Laplace, La., Sunday, Aug. 28, 2016. (Chris Granger/NOLA.com The Times-Picayune via AP)&lt;/p&gt;

By: Associated Press
Posted at 10:33 PM, Aug 28, 2016
LAPLACE, La. (AP) — A bus full of construction workers hit a fire truck on an elevated highway Sunday, killing two people and injuring 36, several of them seriously, Louisiana State Police said.
The ladder truck from St. John the Baptist Parish, west of New Orleans, had parked across the right lane of Interstate 10 to block traffic while police investigated an earlier wreck involving a pickup truck that had skidded on the wet road, crashing into both guardrails about 6:40 a.m., Trooper Melissa Matey said.
The 2002 Eldorado National party bus hit the fire truck and then rear-ended a 2012 Toyota Camry, pushing it into a flatbed trailer being towed by a 2016 Chevrolet Silverado, Matey said. She said the bus then veered behind the fire truck and into the first pickup truck, a 2005 Nissan Titan. It also knocked three firefighters, who were standing near the guard rail, into the water 30 to 40 feet below.
Matey said the wreck killed Jermaine Starr, 21, of Moss Point, Mississippi, a back-seat passenger in the Camry, and St. John the Baptist Parish district Fire Chief Spencer Chauvin. The injured included the other two firefighters, the bus driver, 24 bus passengers and a total of nine people in the car and pickups.
Firefighter Nicholas Saale, 32, of Ponchatoula, and Camry passenger Vontravous Kelly of Moss Point, Mississippi, are in critical condition, she said. The Camry's other two occupants, driver Marcus Tate, 35, and David Jones, both of Moss Point, are in serious condition.
Other injuries — including the Titan's two occupants, who suffered minor injuries in the original crash — ranged from minor to moderate, Matey said.
The bus driver, identified as Denis Yasmir Amaya Rodriguez, 37, of Honduras, will be arrested on two counts of negligent homicide and one each of reckless driving and driving without a license, she said.
"Additional criminal charges are forthcoming," she said.
The injured were taken to hospitals in Baton Rouge, New Orleans, Hammond and LaPlace, she said.
Matey said the bus was taking flood recovery workers from New Orleans to Baton Rouge.
It belonged to a company with two names: AM Party Bus and Kristina's Transportation LLC, both at the same address in Jefferson, about 30 miles from New Orleans in Jefferson Parish, Matey said.
No listing in Jefferson was available. A call to Kristina's Transportation in Destrehan, 12 miles from Jefferson in St. Charles Parish, was not answered Sunday. A woman who answered the phone at AM Party Bus of New Orleans said she was only authorized to take booking calls.
Matey did not know whether Rodriguez was an employee of that company, or whether the company checked to see whether he had a driver's license.
"He is in this country illegally from Honduras. He has no driver's license. He had minor injuries," she said.
Matey did not know where in Honduras Rodriguez is from.
Department of Homeland Security investigators and state police are checking on the passengers' immigration status, she said.
Matey said speed was a factor in both the crash of the Titan, which bounced from one guard rail to the other about 6:40 a.m., and that of the bus at 7:17 a.m.
Copyright 2016 The Associated Press. All rights reserved. This material may not be published, broadcast, rewritten or redistributed.