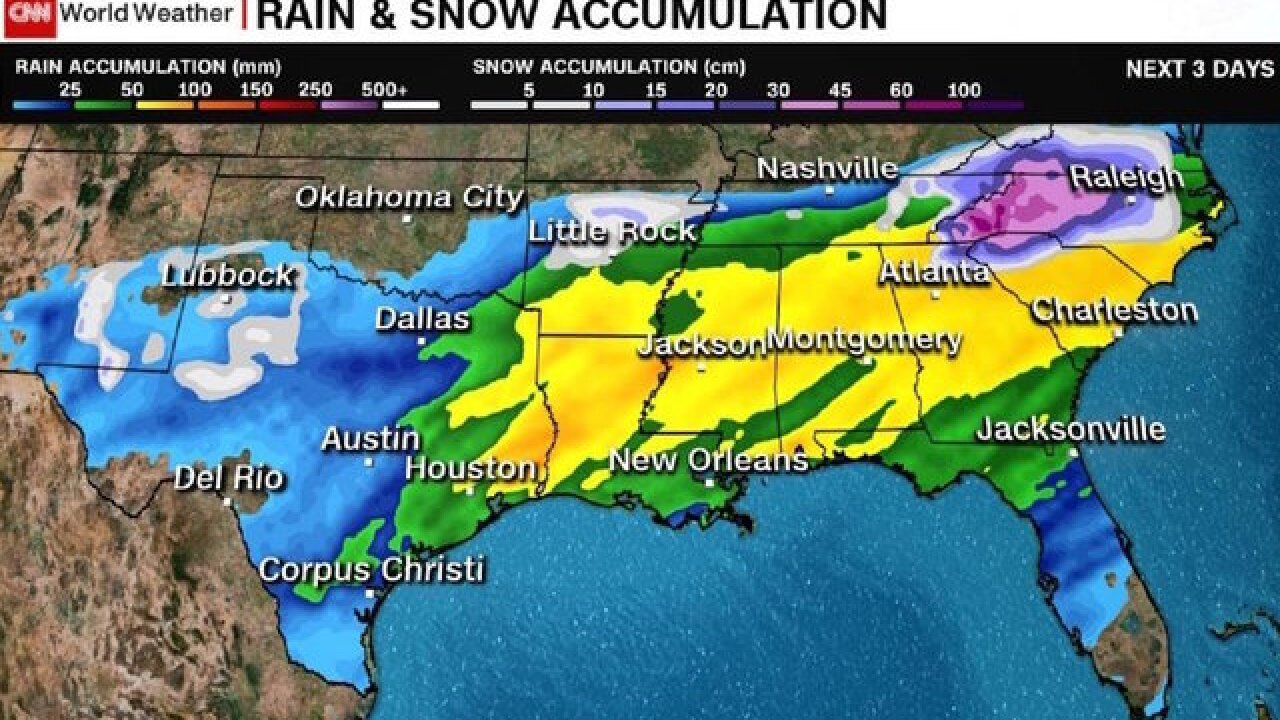 Copyright 2018 Scripps Media, Inc. All rights reserved. This material may not be published, broadcast, rewritten, or redistributed.
&lt;p&gt;A major winter storm is threatening to deliver snow, ice and flooding across much of the United States over the next few days.&lt;/p&gt;

A major winter storm is threatening to deliver snow, ice and flooding across much of the United States over the next few days.

Over 20 million people are under winter storm watches and warnings from New Mexico to North Carolina, where authorities have declared a statewide emergency as some areas could get over a foot of snow.

"Snow may be beautiful but it can also be treacherous and I urge North Carolinians to take this storm seriously and get ready for it now," Gov. Roy Cooper said in a statement.

As this multifaceted storm develops this weekend, here is what meteorologists are expecting, where and when:

After seeing some precipitation Friday, Arkansans are expected to see some winter weather Saturday as the storm moves east toward Tennessee.

North Arkansas will see up to 6 inches of snow and up to one-10th of an inch of ice.

The southern half of Arkansas will get caught up with 4 to 5 inches of rain and flash flooding possible. Central Arkansas looks to only pick up, at most, 1 inch of snow. Meantime the higher elevations of the Ozark Mountains will likely see 2 to 6 inches of snow on top of a glaze of ice up to a quarter of an inch.

Snow totals will be lower in northeastern Arkansas and northwestern Tennessee, where a trace to 1 inch of snow is possible.

Eastern Tennessee, Georgia and the Carolinas

Precipitation creeps in early Saturday, with rain in Georgia and some light, wintry precipitation in the mountains. It picks up late on Saturday, when blizzard conditions are possible in the higher Appalachians, with larger accumulations Sunday into early Monday morning across the zone. The storm on Monday probably will move out to sea, but it also could turn and climb up the East Coast, bringing heavy snow to major metro areas.

Significant snow is expected -- but not certain -- across the mountains of northeast Georgia and the Carolinas.

Parts of North Carolina could see record snowfall, described by the National Weather Service as a "once-in-a-generation event." The mountains and foothills west of Interstate 85, including cities like Winston-Salem, Asheville, Greensboro and Charlotte could get a foot of snow.

However, those predictions sharply drop to 2-3 inches of snow in places like Raleigh and down to 1 inch in Greenville, South Carolina.

The flooding and winter precipitation may also impact Georgia. Heavy rain with 1-3 inches is projected Saturday with "rates expected to be high at times, increasing the threat of flooding," the National Weather Service said.

About 1-2 inches of snow could fall in the higher elevations of north Georgia with up to 5 inches on the highest ridges Sunday night into Monday. Possible freezing rain and dusting snow could also reach the I-85 corridor, including Atlanta by Monday afternoon.

Snow totals east of I-85 will depend on a regional weather phenomenon called "cold-air damming" or "the wedge" -- when cold air pushes in from the northeast against the Appalachians. The mountain range acts as a dam, keeping the cold air pooled like a lake. Warmer air in this scenario would reduce snow accumulation. There's another phenomenon called a "warm nose" that would allow warmer air to mix in above the "'wedge," bringing a more wintry mix Saturday evening and overnight into Sunday morning before snow moves in northwest of I-85.

Precipitation began Friday in Central and North Texas, moving east overnight where fears of flash flooding are increasing through Saturday. Up to 2 inches are possible hourly in coastal towns, including the Houston area, where flash flooding is a concern.

San Antonio and Houston could see flash flooding, as rainfall total could reach 3 to 6 inches, with as much as 10 inches in isolated spots. As of Friday evening, Austin had 2.95 inches of rain and an area of east Texas saw 3.4 inches.