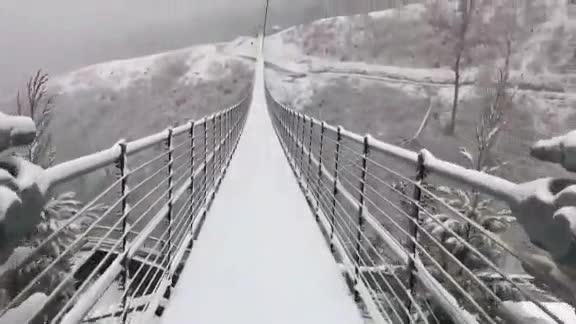 A winter storm hit the mountains of East Tennessee on Tuesday, causing snow to cover the pedestrian suspension bridge that stretches 680 feet across a deep valley.

GATLINBURG, Tenn. — A winter storm hit the mountains of East Tennessee on Tuesday, causing snow to cover the Gatlinburg SkyBridge, a pedestrian suspension bridge that stretches 680 feet across a deep valley.

The bridge, which opened earlier this year, is the longest pedestrian suspension bridge in North America and is 140 feet high at its midpoint.

Snow and icy conditions snarled traffic Tuesday, closing and delaying schools in parts of the Northeast and South.

The National Weather Service says the snow total had surpassed 10 inches at the Buffalo airport on Tuesday morning.

Rochester will eventually be digging out from a similar amount. Northern New England was expected to get between 7 inches and 14 inches of snow.

Numerous vehicle accidents were reported, as well as school closings and delays in western New York.

The South also felt the chill with light snow blanketing cars in Memphis, Tennessee. Warming centers opened in the city, where temperatures fell into the low 20s.

Some West Tennessee schools were closed, and about 20 school systems delayed opening across north Alabama.