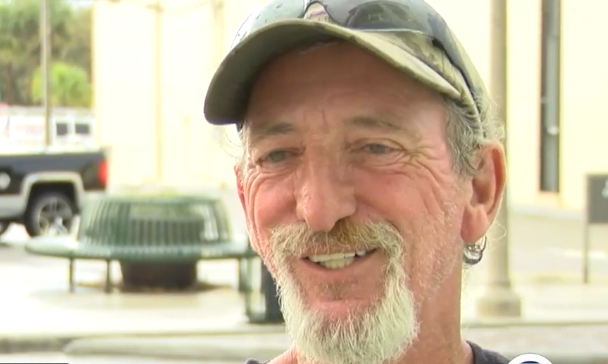 A homeless Navy veteran in our area is crediting several Martin County deputies with helping him get back on his feet.

MARTIN COUNTY, Fla. - A homeless Navy veteran in our area is crediting several Martin County deputies with helping him get back on his feet.

Greg Willis says he has been homeless and living in the woods in Jensen Beach for about 4-months.

It's a place he never imagined he would end up.

“I lost my place to live and also had to give up my job because of that,” Willis said.

But, after spending those several months camping in the same place, Martin County deputies came by one day to warn the near dozen homeless people on the same property that they were soon going to have to leave.

The out of state owner of the property is working to issue them a trespass order.

“I was really freaked out. I had no place else to go,” Willis said.

He did not know things were actually about to change for the better.

“I had no idea where to turn.”
Deputies Andrew Adams, Joseph Angelico and Sergeant George Yacobellis offered to help finding everyone on the property somewhere else to go.

“They’re going to have to vacate and they don’t really have any other options,” said Deputy Adams.

Only Willis took their offer.

“At first, to be honest, I didn’t believe them,” Willis said.

“The idea is to get him out of the woods, a roof over his head,” said Deputy Angelico.

The deputies began making calls to Veterans Service, to churches and other area agencies and resources.

They learned Willis, who was honorably discharged from the military, qualified for housing assistance.

“I am so elated over it. I really didn’t believe there was hope,” Willis said.

Now, deputies hope other homeless people might accept their next offer of help.

“They’re afraid to move out. We’re hoping that with Mr. Willis coming out and some of the other people seeing this that will motivate them as well,” Angelico said.

Another organization has offered to stock the fridge for Willis once he settles in.

Angelico says they hope to have Willis in a new home by the end of the week.