Influenza is on the rise across the country, according to a new Centers for Disease Control and Prevention report.

Influenza is on the rise across the country, according to a new Centers for Disease Control and Prevention report.

Haven't gotten the flu shot yet? This map should give you a good reason: 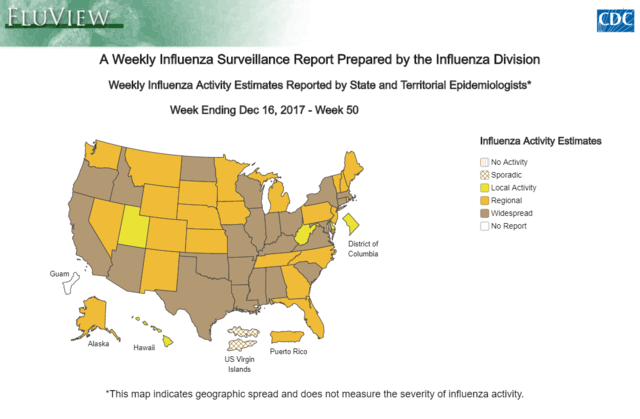 The number of states reporting widespread flu activity jumped from 12 to 23, the proportion of samples testing positive for influenza at clinical laboratories went from 8.4% to 14.0%, and the percentage of people seeking outpatient care for influenza-like illness (ILI) increased from 2.7% to 3.5% over last week’s report, according to the CDC.

The CDC says that the best bet for fighting the flu is to get a flu shot. Check with your physician or your county health department.

According to the CDC's definition, influenza (also known as the flu) is a contagious respiratory illness caused by flu viruses. It can cause mild to severe illness, and at times can lead to death. The flu is different from a cold. The flu usually comes on suddenly. People who have the flu often feel some or all of these symptoms:

Regional influenza activity was reported by Puerto Rico and 23 states:

Local influenza activity was reported by the District of Columbia and four states:

Sporadic activity was reported by the U.S. Virgin Islands. Guam did not report. Geographic spread data show how many areas within a state or territory are seeing flu activity.