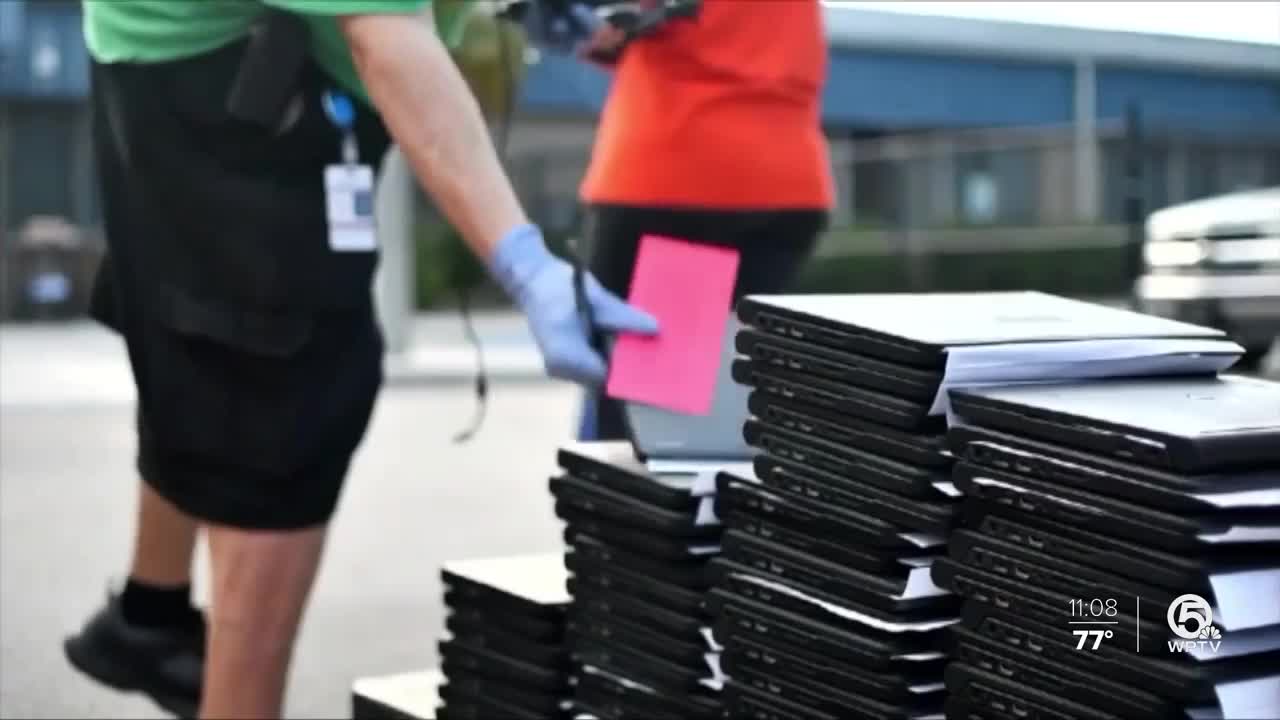 MARTIN COUNTY, Fla. — UPDATE: Martin County School District leadership said Friday that they will meet Monday to go over a plan to resolve some issues with some students' laptops.

The issue seems to come with the windows devices that came from the factory and didn't have the camera and audio enabled. This means the kids can see and hear their teacher, but the students can't be heard.

According to the district, the plan might include having to create a schedule for parents to drop off and pick up laptops since it does not appear the issue can be fixed from home.

The district said parents will be updated after the meeting on Monday.

School districts on the Treasure Coast and the Palm Beach County School District are working to make sure every student has access to a laptop so they can join in on their virtual lessons.

The School District of Palm Beach County, which said it needs more laptops, has received a $30,000 donation from the Honda Classic to go toward supplying laptops to students.

It also announced this week that it has received more than $20,000 through individual donations and more than $3,000 from local Walmart stores. It is also accepting gently-used laptop and tablet donations.

Now, Martin County is also having to take a step back from its original goal to give as many individual students as possible their own laptop. Now, the Martin County School District is providing one laptop per family.

“It’s turning out that more people are showing up for devices than we anticipated,” Gaylord said.

Gaylord explained the school district sent a survey to families to gauge how many families need a laptop or have their own laptop or desktop computer at home. Now, Gaylord questions if that survey revealed the true need.

“If we run out of devices, that means somehow we either didn’t get enough information from the survey, [or] not enough people completed the survey,” Gaylord said.

Another explanation could be that some people showed up to grab a laptop on Wednesday even though that wasn’t their scheduled day for pickup.

Gaylord will be closely watching how many laptops are distributed Thursday and Friday. She’s asking families that have home computers and laptops to be mindful of families who have no technology at home.

“I'm hoping that we have enough devices so every family gets one,” Gaylord said.

“We have 10,000 laptops that we are able to distribute, so what we’re doing now is one per family. That seems to meet the need,” Dr. Moore said.

WPTV is waiting for an update from the St. Lucie County School District.

Martin County parent Cassie Ginsberg has four children who will be logging on to virtual school next week.

“It’s going to be a struggle if they run out of laptops,” Ginsberg said.

She has two high school students, who in Martin County, already have school-issued laptops. Middle school and elementary school students do not have laptops.

Ginsberg would like to see each of her students have their own laptop, but two of her children will have to share.

“I was already stressed to begin with and now this is adding an extra stress because I’m not sure how it’s going to work,” Ginsberg said.

Gaylord said school districts are being flexible, and ready to work around obstacles families face. Students will not be punished for not being able to log onto a class, such as while a sibling is using a computer.

Gaylord also explained not all learning has to be on the computer. For example, students can do physical education, reading, writing, and other learning activities while a sibling uses the laptop.

Dr. Moore said the same for his district's families.

“Our plan provides opportunities for students to get the lesson through the technology, but not be dependent upon the technology to do that learning activity.”