A Facebook post going viral is raising fears across the county about a popular kind of hand drying machine. 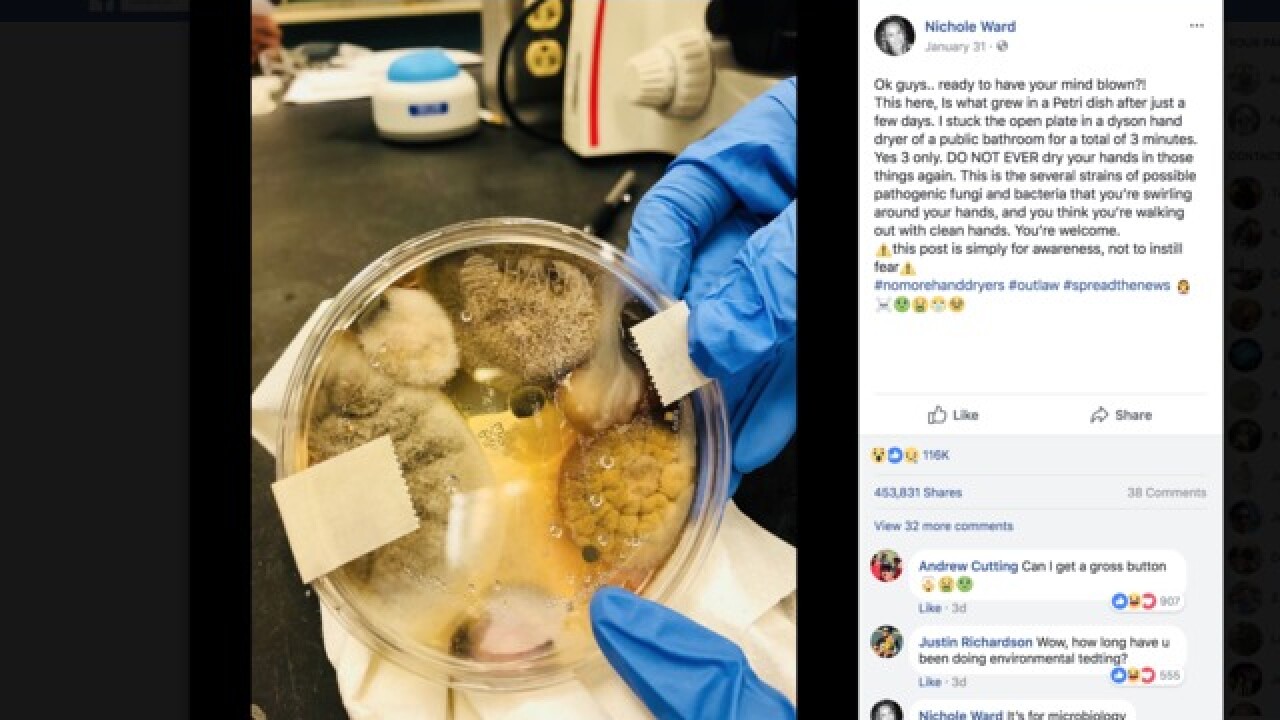 UPDATE: A spokesperson from Dyson provided the following statement about the controversial Facebook post: We’re very surprised to see these results, and unclear on the methodology employed. All Dyson AirbladeTM hand dryers have HEPA filters that capture particles as small as bacteria from the washroom air before it leaves the machine. Dyson AirbladeTM hand dryers are proven hygienic by university research and are trusted by hospitals, food manufacturers and businesses worldwide.

A Facebook post going viral is raising fears across the county about a popular kind of hand drying machine.

The health warning comes during the height of one of the nastiest flu seasons in years.

"Ok guys.. ready to have your mind blown?!" writes Nichole Ward of California on Facebook along side a picture of a bacteria-filled Petri dish.

"This is the several strains of possible pathogenic fungi and bacteria that you’re swirling around your hands, and you think you’re walking out with clean hands," writes Ward.

The picture has been shared nearly 500,000 times since it was posted on January 31.

Ward reached out to the ABC Action News sister station in San Diego to clarify that her Facebook post was never intended for a wider audience.

She says she posted the picture as a warning for her immediate family and friends. She says she wanted them to see something she discovered during a lab experiment, but it was not her intent to provoke a national debate or call out Dyson. And she didn’t expect the post to go viral.

Ward says she held up a Petri dish to a Dyson hand dryer at a public bathroom for 3 minutes, then incubated the Petri dish for about 48 hours.

Ward's picture has touched a nerve for those who have come across it online.

"Ahhhh!!!! I just used one of those today, and on it it says ‘the most hygienic’ and all I could wonder is what about the air it blows into your face which is the contaminated air in the bathroom. Fecal matter everywhere!!!!! Gross." wrote Darby Toth online.

This isn't the first time Dyson's hand dryers have been questioned by the public, or even the scientific community.

Dyson has been on the defensive about their hand dryers for years now, even since a series of studies came out claiming that the air dryers blow bacteria all over the bathroom.

Dyson even created a well-produced online video interviewing a microbiologist who spends several minutes trying to debunk the scientific studies, also pointing out that some of them were funded by the paper towel and tissue industry, which they were.

An investigative effort by the ABC Action News station in Philadelphia revealed lots of nasty types of bacteria on Dyson hand dryers all over the city, from fast food restaurants to retail stores, and asked a scientist at the Thomas Jefferson University Hospital to weigh in.

"Those are organisms that are found in stool specimens; they can make you very sick," explained Dr. Amity Roberts in 2016. "I would not want to be placing my hands or a child's hands in these particular dryers," Roberts said.

Still, she added that it's still better to use the air dryers than to not wash your hands at all.