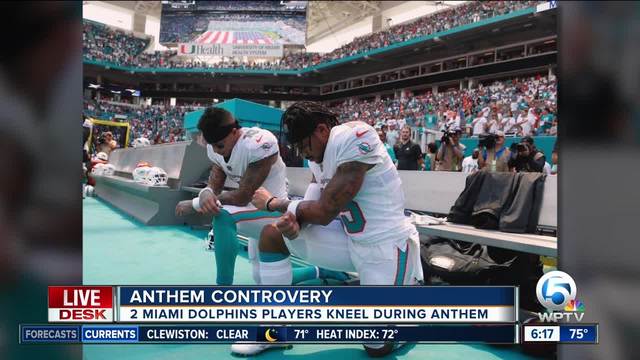 Miami Dolphins wide receivers Kenny Stills and Albert Wilson knelt near the team bench during the National Anthem ahead of the team's season opener on Sunday. 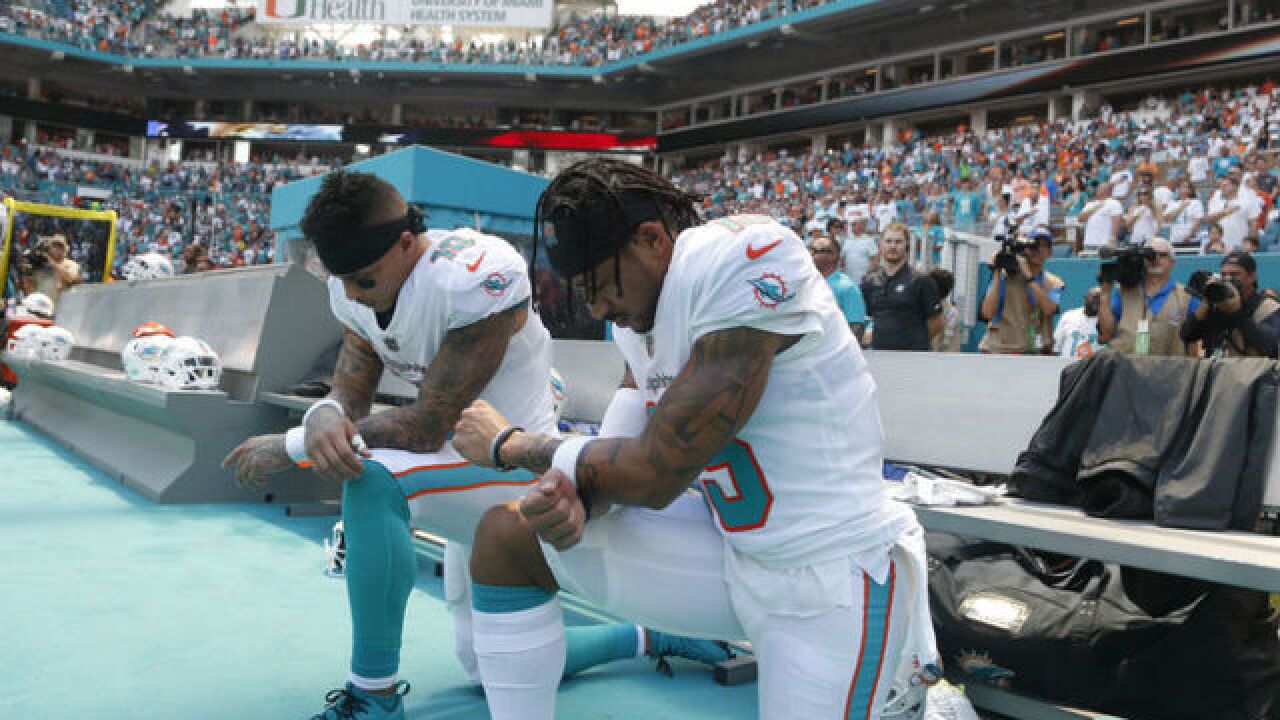 (CNN) -- Miami Dolphins wide receivers Kenny Stills and Albert Wilson knelt near the team bench during the National Anthem ahead of the team's season opener on Sunday.

Dolphins defensive end Robert Quinn stood during the anthem with a fist raised before the National Football League team's game against the Tennessee Titans in Miami Gardens, Florida.

A CNN Sports crew at the game witnessed the three players' demonstration during the anthem.

The three, who took similar action during the preseason, continued the protests of police shootings of black men and other social injustices faced by African-Americans started two years ago by former San Francisco 49ers quarterback Colin Kaepernick.

Kaepernick sparked controversy when he sat, then knelt, during the National Anthem before several 2016 NFL preseason and regular-season games. Former 49ers safety Eric Reid joined Kaepernick in the protest.

Kaepernick said then he could not "show pride in a flag for a country that oppresses black people and people of color."

Kaepernick and Reid, who are not currently playing professional football, voiced support for Stills and Wilson on Sunday, saying they "continue to show their unwavering strength by fighting for the oppressed! They have not backed down, even when attacked and intimidated."

Kaepernick is the face of Nike's new ad campaign, which promotes the 30th anniversary of its "Just Do It" advertising. One spot features a black and white close-up of his face with the caption: "Believe in something. Even if it means sacrificing everything."

After the ad was unveiled, people posted videos of themselves burning their Nike sneakers and sportswear to protest the company's decision to use Kaepernick.

On Sunday, President Donald Trump, who has criticized the players' demonstration in the past, again took to social media to voice his displeasure.

"If the players stood proudly for our Flag and Anthem, and it is all shown on broadcast, maybe ratings could come back? Otherwise worse!" the President wrote.

In May, team owners declared that team personnel on the field during the anthem must "stand and show respect for the flag and the Anthem."

Players could stay in the locker room during the anthem, but if any team personnel on the field knelt, the team would be fined under the policy. Teams then could decide whether and how to punish offending staff.

But the NFL players' union in July filed a grievance, arguing the new policy infringed upon player rights and was enacted without consulting the union.

NFL officials said they would put the policy on hold to discuss a solution with the union.