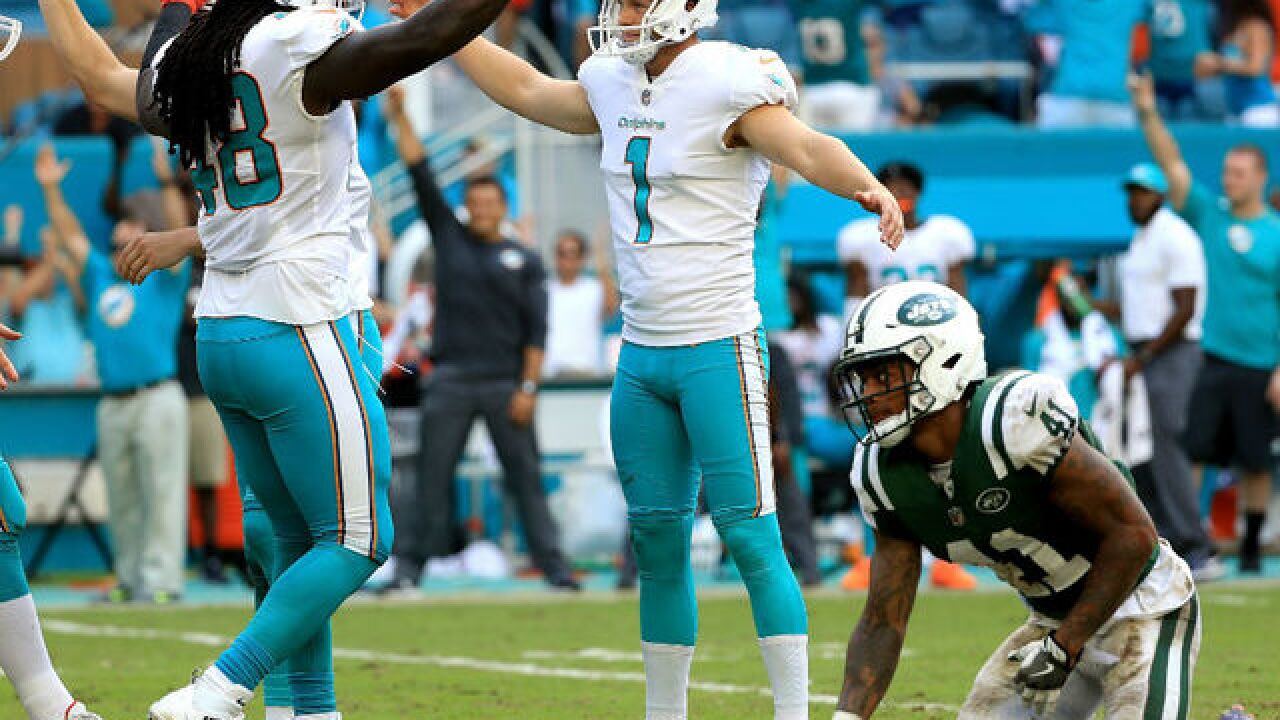 Image copyright 2017 Getty Images. All rights reserved. This material may not be published, broadcast, rewritten, or redistributed.
&lt;p&gt;Cody Parkey #1 of the Miami Dolphins celebrates after kicking the field goal during the fourth quarter against the New York Jets at Hard Rock Stadium on October 22, 2017 in Miami Gardens, Florida. (Photo by Mike Ehrmann/Getty Images)&lt;/p&gt;

Rallies are becoming routine for the overachieving Dolphins, who pulled off another improbable win Sunday by erasing a 14-point fourth-quarter deficit to beat the New York Jets 31-28.

Josh McCown threw three touchdown passes and ran for another for the Jets, but his interception in the final minute set up the winning field goal.

Bobby McCain stepped in front of a pass intended for Jermaine Kearse to give Miami the ball at the Jets 27 with 39 seconds left. Cody Parkey kicked a 39-yard field goal with 22 seconds to go for the Dolphins' first lead of the game.

It was the second consecutive comeback win by the Dolphins (4-2), who overcame a 17-point deficit in the second half a week ago for an upset victory at Atlanta. They've won 12 games in a row when the margin is seven points or less. The NFL record is 14 consecutive games.

"It sounds like a broken record," said defensive end Cameron Wake, who had 2½ sacks. "It's a belief in one another. We've been showing that over and over and over."

Cutler left the game due to a chest injury with his team trailing 21-14. After the Jets took a two-touchdown lead, Moore threw scoring passes to Kenny Stills covering 28 and 2 yards to tie the game.

"That was fun, man," said Moore, who played for the first time this year. "It's always fun to get a win, and then when you can contribute and have a comeback like that, it's fun for everybody."

McCown threw for touchdowns of 29 yards to Kearse, 17 yards to Robby Anderson and 10 yards to Austin Seferian-Jenkins. They came against a defense that hadn't allowed more than 20 points all season.

But the Jets were shut out over the final 16:41, and McCown's poor pass on first down from his own 15 with the score tied and 47 seconds left proved costly.

"I don't want to think about it. It makes me sick," McCown said. "To come out on the road and get going like we did and then finish it like that is frustrating."

There were signs at the end of a Jets meltdown. Receiver Robby Anderson angrily spiked his helmet in the final seconds, and after the game there was shouting in the locker room behind closed doors.

Cutler threw for two touchdowns before going to the locker room with a chest injury after being hit by linebacker Jordan Jenkins early in the third quarter. Some Miami fans cheered when Moore entered the game to replace Cutler, who drew boos in his Dolphins home debut two weeks ago.

Moore's fifth pass was intercepted by Marcus Maye, whose 33-yard return set up the Jets' final score. Moore finished 13 for 21 for 188 yards.

Teammate Jarvis Landry had seven catches for 93 yards and a score. He gained 17 yards on a catch and run that included a leap over a defender.

OVERTURNED: Stills set up Miami's first score with a sensational 36-yard catch, pulling in a jump ball after he fell to the turf. The pass was first ruled incomplete, but the call was reversed following a replay review.

DEFENSIVE SCORE: An interception by 315-pound defensive tackle Muhammad Wilkerson set up the touchdown that gave the Jets a 21-14 halftime lead. With the Dolphins backed up at their 7, Wilkerson caught a pass deflected by Jamal Adams on a safety blitz and was tackled at the 1. McCown scored on a sneak two plays later.

Seferian-Jenkins scored for the third week in a row.

GETTING COMFORTABLE: Anderson celebrated his 18-yard touchdown catch in the first quarter by joining the crowd.

After Anderson made the grab, he ran through the end zone, leaped over the retaining wall and took a seat in a cushy first-row chair, his feet propped on the wall. Fans around him laughed even though the score left Miami behind 14-7.

Dolphins: Cutler was scheduled for an MRI. LT Laremy Tunsil suffered a knee injury and DE Andrew Branch hurt his groin. Both departed in the third quarter.

Dolphins: play at Baltimore on Thursday.

Jets: play at home against Atlanta next Sunday.