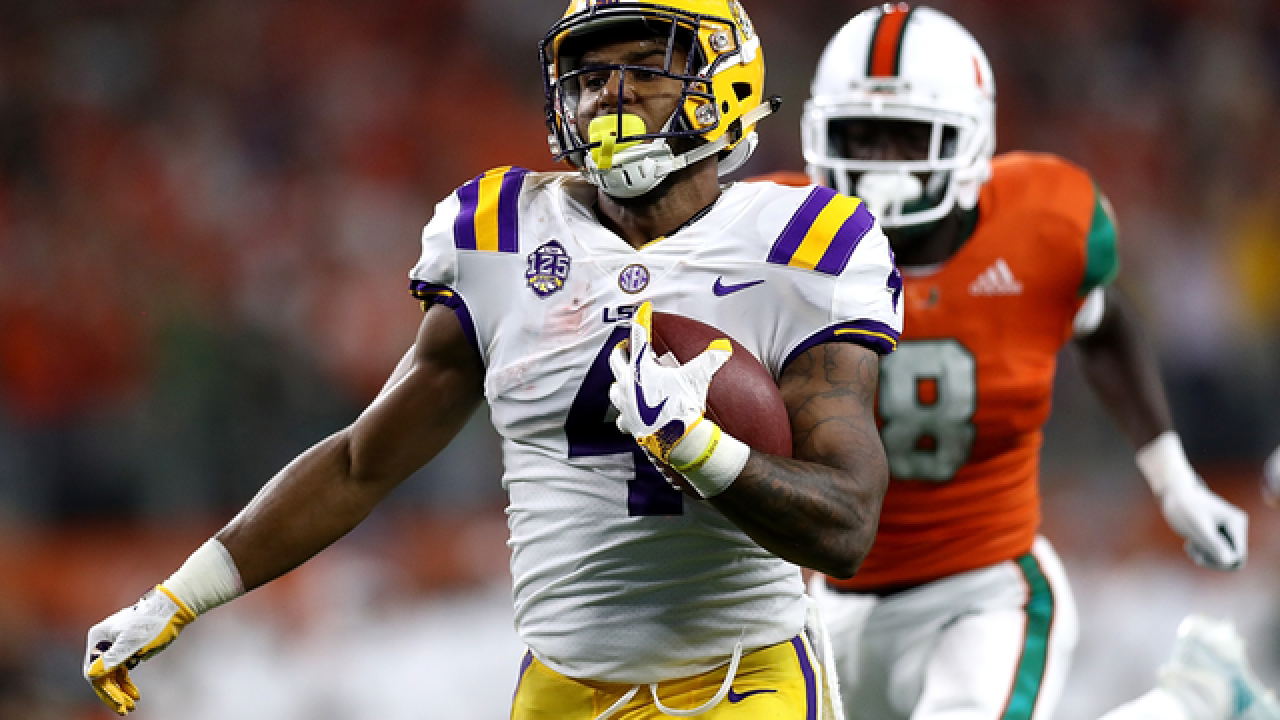 Copyright Getty Images
&lt;p&gt;ARLINGTON, TX - SEPTEMBER 02: Nick Brossette #4 of the LSU Tigers runs for a touchdown against the Miami Hurricanes in the first quarter during the AdvoCare Classic at AT&amp;T Stadium on September 2, 2018 in Arlington, Texas. (Photo by Ronald Martinez/Getty Images)&lt;/p&gt;

ARLINGTON, Texas (AP) — Nick Brossette and Joe Burrow waited a long time for their chance to be impact players. They helped No. 25 LSU make a strong opening statement.

Brossette ran for 125 yards with his first two career touchdowns and grad transfer quarterback Burrow, who appeared in 10 games the past two seasons at Ohio State, won his first college start as the Tigers beat No. 8 Miami 33-17 on Sunday night.

"I knew I needed to be patient and humble, and that my time would come," said Brossette, who had only 96 yards rushing all last season for the Tigers as a third-string junior.

Once the game started, the Hurricanes never really backed the bravado they showed in a feisty exchange of words and some shoving between the teams during warmups about 75 minutes before kickoff.

LSU led 27-3 by halftime after Jacob Phillips returned an interception 45 yards for a touchdown.

"Regardless of what's out there and what people say, we believe in each other in that room, and we proved it tonight," Tigers coach Ed Orgeron said about the perception that his team was the underdog.

Miami, which has lost four games in a row since a 10-0 start last season, never got to celebrate with that gaudy turnover chain that comes out when the Hurricanes get a takeaway.

"We certainly had some things go well and some things not well," said Miami coach Mark Richt, in his third season at his alma mater. "A lot of self-inflicted wounds, not to take anything away from what LSU did. They beat us soundly."

LSU went ahead to stay in the final minute of the first quarter after Burrow changed a play at the line of scrimmage. Brossette then took an inside handoff and went untouched down the middle of the field for a 50-yard TD run that snapped a 3-3 tie.

"I saw the goal line," Brossette said. "It opened up, which shocked me. I put my head down and ran."

Burrow finished 11 of 24 for 140 yards, and Orgeron said the quarterback did a great job "just managing the game," remaining cool under pressure and making adjustments when necessary.

"Execute, do what the game plan says," Burrow said "Really all that was on my mind was going out and playing with my brothers and executing at a high level."

Brossette's 1-yard run made it 17-3 on an 11-play drive when LSU twice converted fourth-and-1 — on a 2-yard gain by Brossette near midfield, and when Miami jumped offside.

"We saw it in camp, I thought he was our most physical back," Orgeron said.

Cole Tracy, a kicker last season at Division II Assumption College, made four field goals in his Tigers debut. His 54-yarder, which tied a school record, just skimmed over the crossbar and made it 33-3 late in the third quarter.

When LSU fumbled on its opening drive, receiver Dee Anderson managed to recover after taking a shot to the head and losing the ball briefly at the end of an 11-yard catch for a first down. The Hurricanes instead lost starting cornerback Trajan Bandy when he was ejected for targeting.

The Hurricanes thought they had a fumble return for a touchdown later in the first quarter, but a replay review determined it was an incomplete pass by Burrow instead of a fumble.

Miami: Malik Rosier had a record-setting season last year with his 31 touchdowns (26 passing, five rushing) and 3,588 total yards, but had some of the same issues that plagued him late. Rosier was 15 of 35 for 259 yards with two interceptions against LSU. The Hurricanes were down 33-3 before his 3-yard TD keeper and 32-yard TD pass to Brian Hightower in the fourth quarter. In the losing streak to end last season, he had three total TDs (all passing) with five interceptions.

"The whole game was a huge learning experience for us," Rosier said. "They did some stuff that we weren't prepared for. That's why I had so many scrambles and stuff."

LSU: The Tigers had three other division foes from the brutal SEC West ranked ahead of them in the preseason Top 25. They have one more game before an early opportunity to show if they are for real. They play at No. 9 Auburn in two weeks.

Jeff Thomas led Miami with five catches for 132 yards, including an impressive 1-handed grab along the sideline on a first-quarter drive that led to a Hurricanes field goal. Thomas had another highlight play in the third quarter, when he went high in the air to make a two-handed catch in front of defenders along the sideline.

AT HOME IN JERRYWORLD

LSU is 4-0 at AT&T Stadium, the home of the NFL's Dallas Cowboys. All of those wins have been again Top 25 opponents, in three season openers and the 2011 Cotton Bowl over Texas A&M.