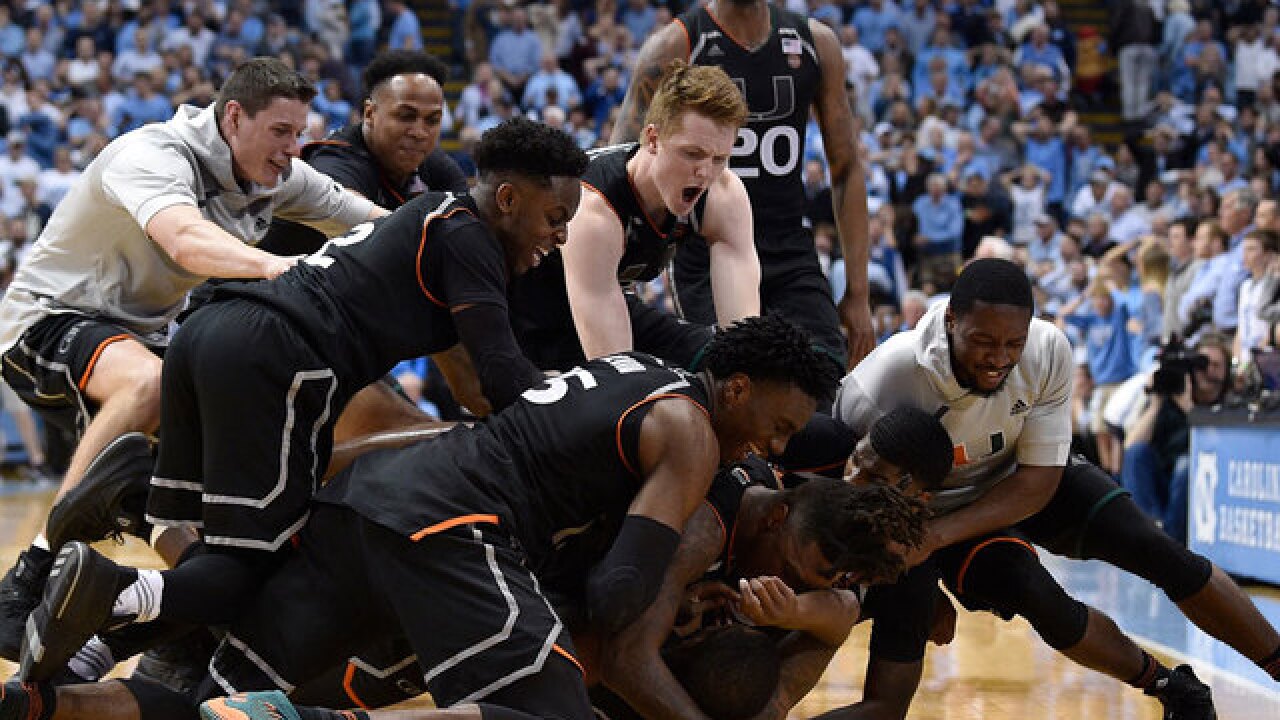 Image copyright 2018 Getty Images. All rights reserved. This material may not be published, broadcast, rewritten, or redistributed.
&lt;p&gt;Teammates pile on Ja'Quan Newton #0 of the Miami Hurricanes as they celebrate after his game-wining basket against the North Carolina Tar Heels during their game at the Dean Smith Center on February 27, 2018 in Chapel Hill, North Carolina. Miami won 91-88. (Photo by Grant Halverson/Getty Images)&lt;/p&gt; 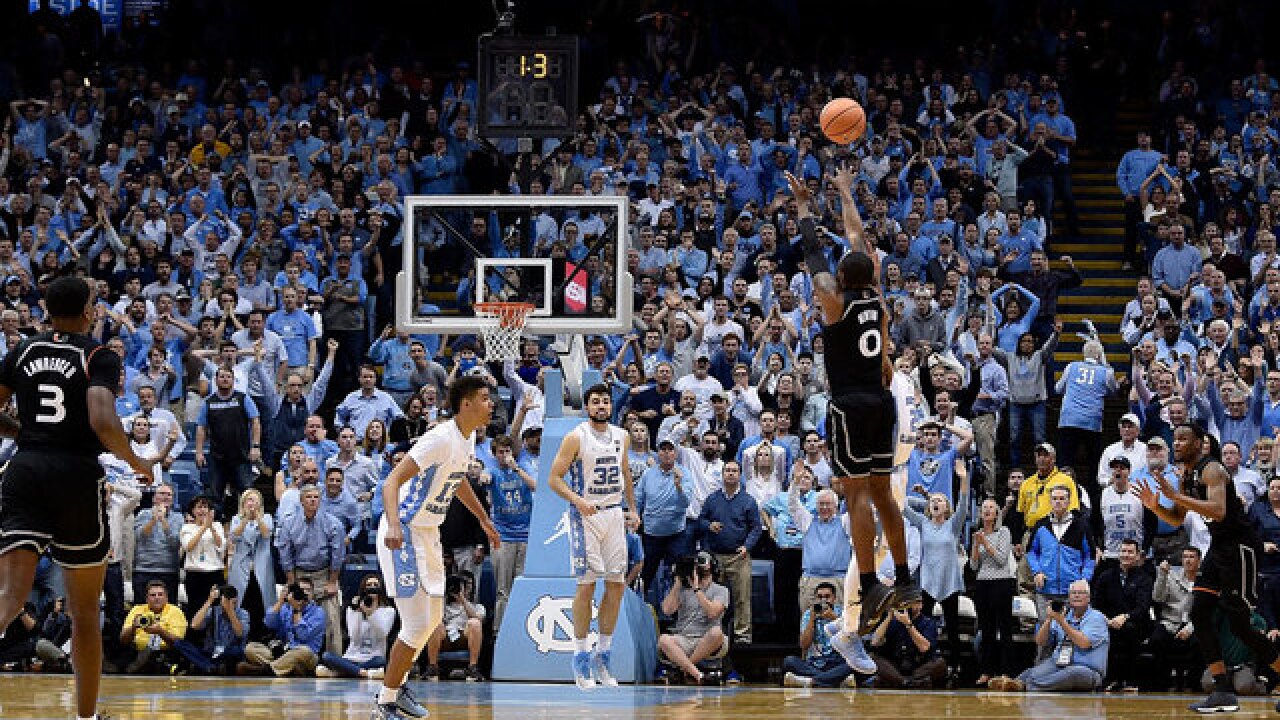 CHAPEL HILL, N.C. (AP) — Miami had just seen the last of its 16-point lead vanish with only a few seconds left when Ja'Quan Newton took an inbounds pass and sprinted upcourt.

Time for one more shot, he thought.

And what a remarkable shot it was.

Newton hit a running 3-pointer from a few steps across midcourt at the horn, lifting Miami to a 91-88 upset of No. 9 North Carolina in a wild finish Tuesday night.

"I've made a buzzer-beater before but not at this type of level," Newton said. "This is one thing I've always dreamed about. ... For me to actually do it right now at this moment, out there against North Carolina, that's something I will remember forever."

IS IT MARCH YET?! 😱pic.twitter.com/pIag0HBiVd

It's unlikely anyone in the Smith Center will forget this one anytime soon, either.

UNC's Joel Berry II had just hit a tough 3 of his own with 4.1 seconds left, tying the game to complete the Tar Heels' big second-half comeback. But Newton cut across the lane to take the inbounds pass in stride from Anthony Lawrence II, then launched the shot off his left foot over Berry from beyond 30 feet.

The ball banged in from the inside the back rim.

"When it just went in," Berry said, "I couldn't believe it."

Within seconds, freshman Lonnie Walker IV was tackling Newton followed by a celebratory mob in front of a stunned blue-clad crowd.

"When I was guarding Joel, he came down and hit a great shot," Newton said. "Soon as he hit the shot, I came around and I wanted the ball. ... I got it. I looked at the clock when I was dribbling upcourt and it said 3 seconds left.

Officials quickly determined the shot came in time after looking at a replay, though UNC coach Roy Williams was already shaking hands with Newton and the Hurricanes before the call was official.

"On the court, you always know whether it's late or whether it's early," UNC junior Kenny Williams said. "I knew there wasn't any point in them checking."

It capped a game that saw Miami (21-8, 10-7 Atlantic Coast Conference) squander a 59-43 lead with about 16 minutes left, only to come up with a huge win with the ACC Tournament just a week away.

Chris Lykes scored 18 points to lead Miami, which shot 55 percent. Newton finished with 15 points and made 4 of 4 free throws in the final 25 seconds to help Miami stave off UNC's frantic comeback until Berry's shot.

Berry matched his career high with 31 points for the Tar Heels (22-8, 11-6), who lost their final home game to snap a six-game winning streak.

"I really thought we were going to win the game," said Roy Williams, his voice cracking with emotion due to it being the final home game for seniors Berry and Theo Pinson. "He made a big-time shot. The clock ran out on us."

Miami: The Hurricanes had won their past two games by a combined four points, including a comeback from 14 down to beat Boston College on Walker's 3-pointer with 2.4 seconds left Saturday. This one fit right in — and truthfully topped it.

UNC: The Tar Heels entered this one trying to close out a perfect February, which included emotional rivalry wins against Duke and North Carolina State as well as road wins at Louisville and Syracuse. But they struggled for stops on a night when they shot 54 percent, and they also went just 13 for 20 at the line — including two to tie it in the final minutes before Berry's final basket.

Miami coach Jim Larranaga said he considered calling a timeout before the Hurricanes inbounded the ball to Newton.

"I saw Ja'Quan go on the run, which I felt like that was our best chance before they set their defense," Larranaga said. "Anthony Lawrence is a very good inbounder and he got it to Jaquan in rhythm, in stride, so he had a lot of speed going forward."

As Larranaga gave his postgame comments, Newton stared at a nearby wall-mounted TV replaying his remarkable shot.

Larranaga said the final play ended up being simply: "Ja'Quan, score so we can win this game."

UNC: The Tar Heels close with a trip to fifth-ranked rival Duke on Saturday night.