Zach Sieler gets contract extension, but intends to keep living in RV

'I plan on being in that for a while,' Dolphins defensive tackle says of motorhome 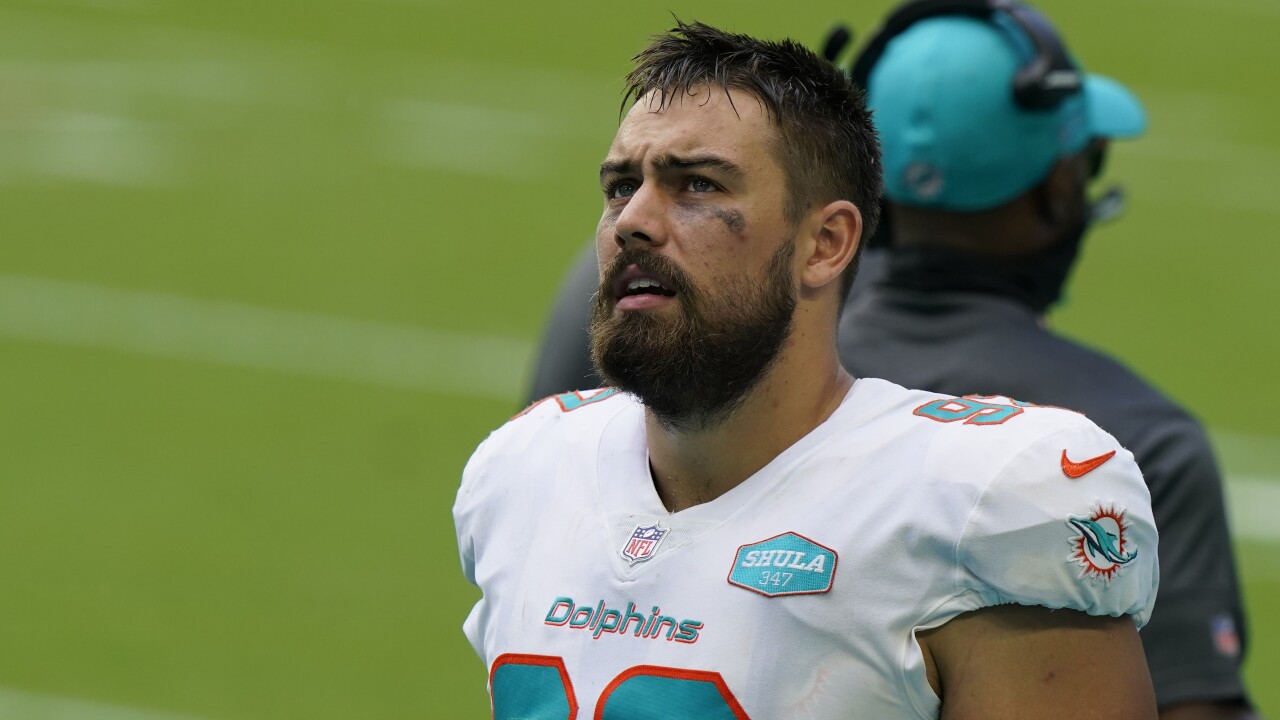 (Copyright 2020 The Associated Press. All rights reserved. This material may not be published, broadcast, rewritten or redistributed.)
Wilfredo Lee/AP
Miami Dolphins defensive tackle Zach Sieler looks up from the sideline during the second half of a game against the Buffalo Bills, Sunday, Sept. 20, 2020, in Miami Gardens, Fla.

MIAMI GARDENS, Fla. — Not even the riches of an NFL salary could keep Zach Sieler from trading in his home on wheels.

The Miami Dolphins defensive tackle, fresh off signing a contract extension through the 2023 season, said Monday that he won't be moving out of his recreational vehicle anytime soon.

"I love it," he told reporters. "I'm happy with what I've got. It's perfect for me. I'm going to keep that and keep going. I plan on being in that for a while."

A 2018 seventh-round draft pick by Baltimore, Sieler came to South Florida via RV in December 2019 after the Ravens released him. He was claimed off the waiver wire by the Dolphins the next day.

Although the terms of his contract weren't disclosed, the 25-year-old said he has no intention of selling his RV or moving into a posh pad.

"For me, it's easy," Sieler said of the motorhome. "It's simple. Most of my time is spent at the facility anyways, so I don't see any point in anything else for now."

Sieler has played in every game for the Dolphins (6-3) this season and started his third game in Sunday's 29-21 over the Los Angeles Chargers. He has been one of the emerging stars for the Dolphins during their four-game winning streak, compiling 26 tackles (13 solo) and 1.5 sacks.

"I think what allows a guy to make a team and to contribute are, is he tough? Is he smart? Does he love to play? Is he team-first? Is he competitive?" Flores said. "I think if you have all those qualities, then you give yourself an opportunity to learn, to develop, to improve and eventually contribute."

Flores said he sees all of the above in guys like Sieler, linebacker Andrew Van Ginkel and cornerback Nik Needham.

Statistics and playmaking abilities aside, Sieler was more than happy to boast about his home on wheels.

"It's a 35-foot fifth wheel, so it's got two slide-outs -- I don't even know how wide it is, 10 feet -- 35 times 10, so you're looking at a small space," he described. "It's a toy hauler -- got a nice patio out back. The back door drops down, little patio and then you can go all the way down and there's a garage. You can put a golf cart or something back there if you do trips with it, and on top of all that, to have a trailer, it's an opportunity for me to get a truck and build that truck up bigger because you've got to tow a trailer. So that's a nice little excuse for me to work on, to tinker on a truck, because I enjoy doing that kind of stuff."

The NFL can be a nomadic business, so a motorhome actually makes a lot of sense, but that doesn't mean Sieler isn't committed to staying in South Florida. His new contract is proof of that.