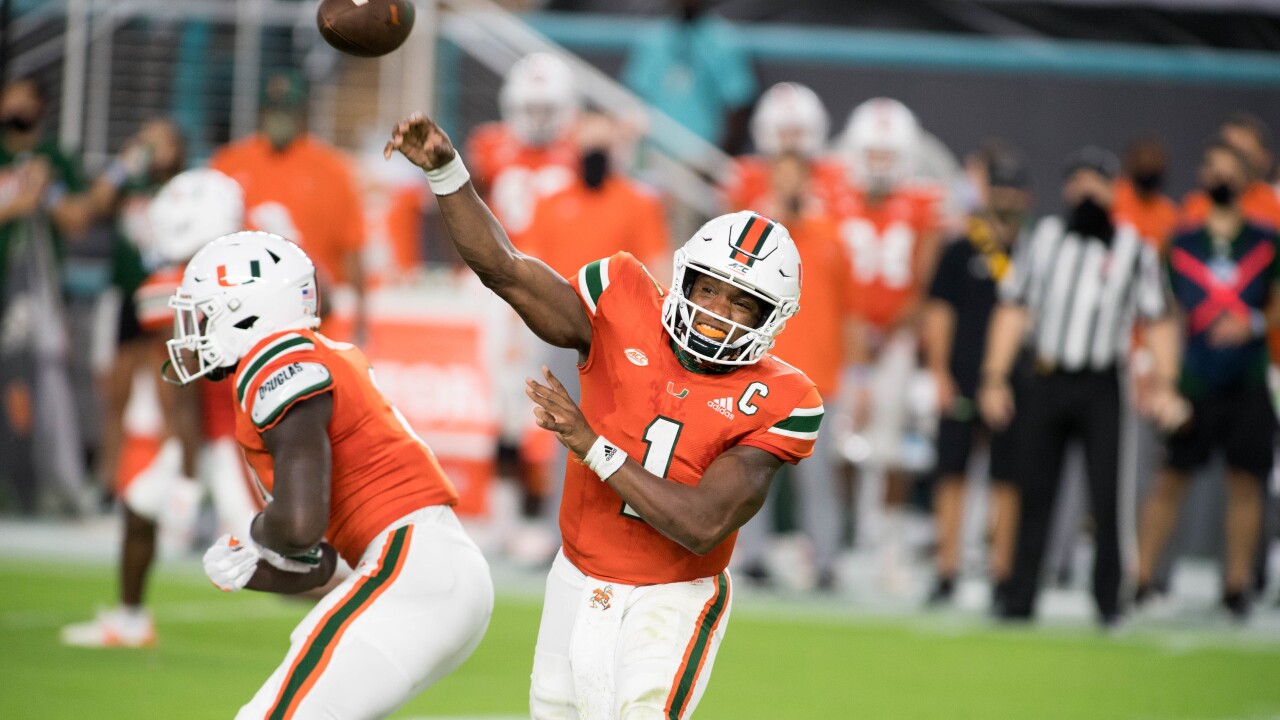 Copyright 2020 Scripps Media, Inc. All rights reserved. This material may not be published, broadcast, rewritten, or redistributed.
Jeff Romance
Miami quarterback D'Eriq King throws in his debut for the Hurricanes against UAB, Sept. 10, 2020, at Hard Rock Stadium in Miami Gardens, Fla. The Hurricanes defeated the Blazers 31-14.

Harris' second touchdown from 4 yards late in the third period gave Miami a 24-14 lead after the Blazers of Conference USA got within three on Spencer Brown's 6-yard run.

Houston graduate transfer D'Eriq King threw for a touchdown and scored one for Miami, which became the first school from a Power 5 conference to begin the game-depleted 2020 season.

The Hurricanes snapped a 7-7 tie and took the lead for good on King's 12-yard run early in the second quarter. Jose Borregales' 25-yard field goal in the Hurricanes' first possession of the second half increased their lead to 17-7.

The Blazers (1-1) struck first on Tyler Johnston's 16-yard pass to Austin Watkins with 2:40 remaining in the first quarter.

The lead was short-lived after Harris' 66-yard run on the next drive. Miami opted to go for it on a fourth-and-1 at its 34 and Harris broke through the UAB line untouched for the longest touchdown run of his career.

Despite getting the go-ahead to play this season, Miami will be without highly regarded defensive end Greg Rousseau. Projected as a high NFL draft choice next spring, Rousseau opted to sit out the season.

UAB coach Bill Clark told a Birmingham radio station that a few of his reserves tested positive for coronavirus and didn't make the trip to South Florida.

Thursday's attendance of 8,153 at Hard Rock Stadium fell short of the 20% cap allowed at the 65,000-seat venue's capacity in compliance with coronavirus social-distancing guidelines. Spectators were scattered throughout the stadium's lower and upper decks.