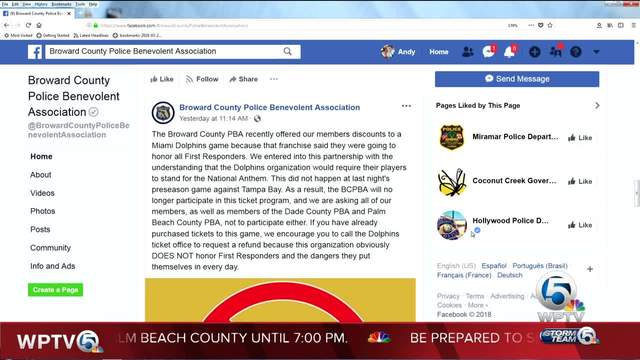 A Broward County police union is urging Miami Dolphins ticket holders to return their tickets after members of the team knelt during the National Anthem to protest police brutality, among other racial and social issues. 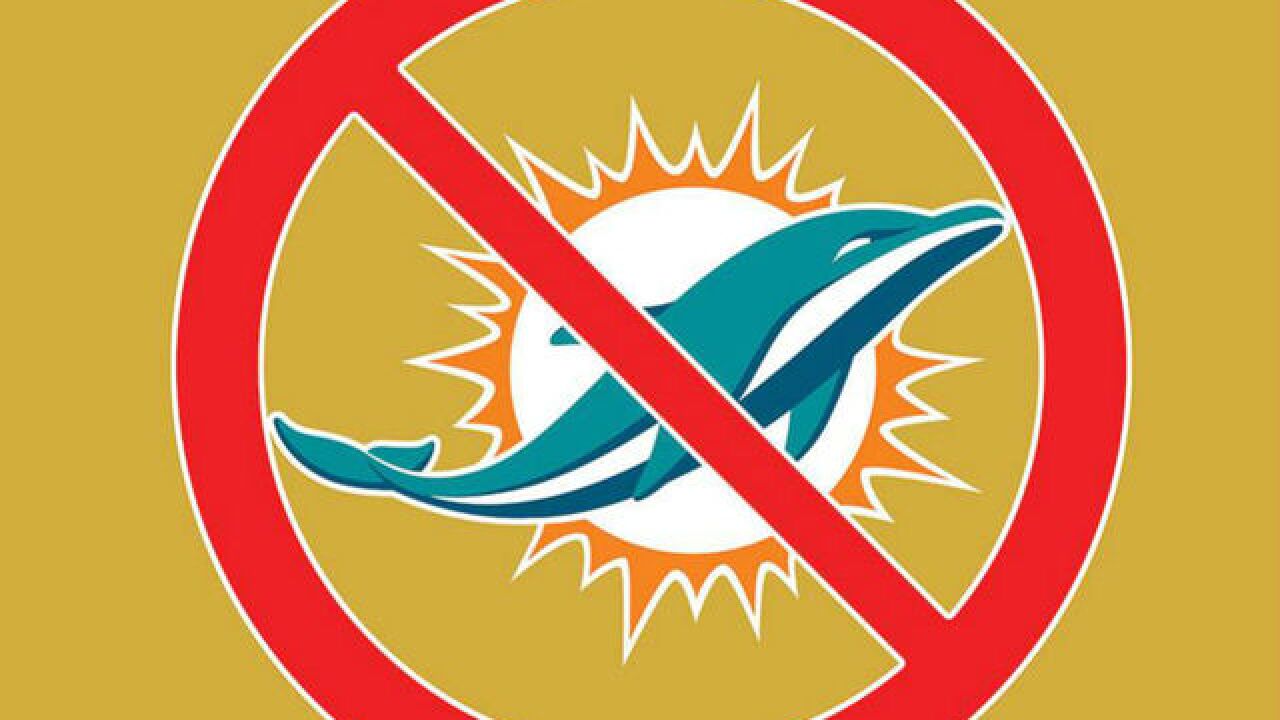 (CNN) -- A Broward County police union is urging Miami Dolphins ticket holders to return their tickets after members of the team knelt during the National Anthem to protest police brutality, among other racial and social issues.

The Broward County Police Benevolent Association (BCPBA) said Friday it would end its discount ticketing program for members after the protests Thursday night, when Dolphins wide receivers Kenny Stills and Albert Wilson knelt during the National Anthem ahead of their game against Tampa Bay, according to the Miami Herald. Dolphins defensive end Robert Quinn raised also his fist during "The Star-Spangled Banner," according to CNN affiliate WTVJ-TV.

"We feel like this is a slap in the face," said Rod Skirvin, BCPBA vice president. "Many of us are former military members, and we feel that the protest to take a knee is against us. ... As an organization, we can't participate in anything with the NFL as long as these protests continue."

The police union had offered its members the ticket discounts because, according to them, "the franchise said they were going to honor all first responders" and require players to stand for the anthem.

"This did not happen at last night's preseason game against Tampa Bay. As a result, the BCPBA will no longer participate in this ticket program," the police union said in a Facebook post. "This organization obviously DOES NOT honor First Responders and the dangers they put themselves in every day."

BCPBA also asked members of the Dade County PBA and Palm Beach PBA not to participate in the discount ticketing program.

"We offered them a second chance," he said. "I told them that should they change their stance, we would reconsider."

The Miami Dolphins did not responded to CNN's request for comment late Saturday.

'The NFL players are at it again'

The Dolphins weren't the only team to protest Thursday. In Jacksonville, several Jaguars -- including Jalen Ramsey, Telvin Smith, Leonard Fournette and T.J. Yeldon -- were not on the field as the anthem played ahead of their game against the New Orleans Saints, The Florida Times-Union reported.

"The NFL players are at it again - taking a knee when they should be standing proudly for the National Anthem. Numerous players, from different teams, wanted to show their 'outrage' at something that most of them are unable to define," he said in one tweet.

In another tweet, Trump said "a football game, that fans are paying soooo much money to watch and enjoy, is no place to protest. Most of that money goes to the players anyway. Find another way to protest. Stand proudly for your National Anthem or be Suspended Without Pay!"

The protests came months after team owners reacted to public backlash in May by issuing a policy requiring that all team personnel who decide to be on the field during the song "shall stand and show respect for the flag and the Anthem."

The policy said players would be allowed to stay in the locker room during the anthem if they chose -- but if any team personnel did kneel on the field, the team would be fined. The teams then could decide how and whether to punish offending personnel.

That didn't sit well with the players, though. In July, the players association filed a grievance, saying the new policy infringed upon player rights and was enacted without consulting the union.

A week later, the NFL said it would put the policy on hold so it could discuss a solution with the association.

It all began with Colin Kaepernick

The anthem controversy has been rumbling since 2016 when then-San Francisco 49ers quarterback Colin Kaepernick knelt during the anthem to draw attention to racial and social injustices.

An increasing number of players joined him, but critics perceived the protests as unpatriotic and disrespectful of the American flag and US military.

The issue came to a head when Trump said in September 2017 that NFL owners should tell protesting players, "Get that son of a bitch off the field right now, he's fired. He's fired!"

Soon more players began to kneel during the anthem, and the controversy in the most popular sports league in America became a partisan talking point.

In a tweet Thursday, Kaepernick lauded Stills and Wilson, two of the Dolphins who protested Thursday night.

Kaepernick has not been hired by any NFL team since he became a free agent in 2017. He has filed a grievance against the NFL, saying team owners colluded to deny him a job because of the protests.