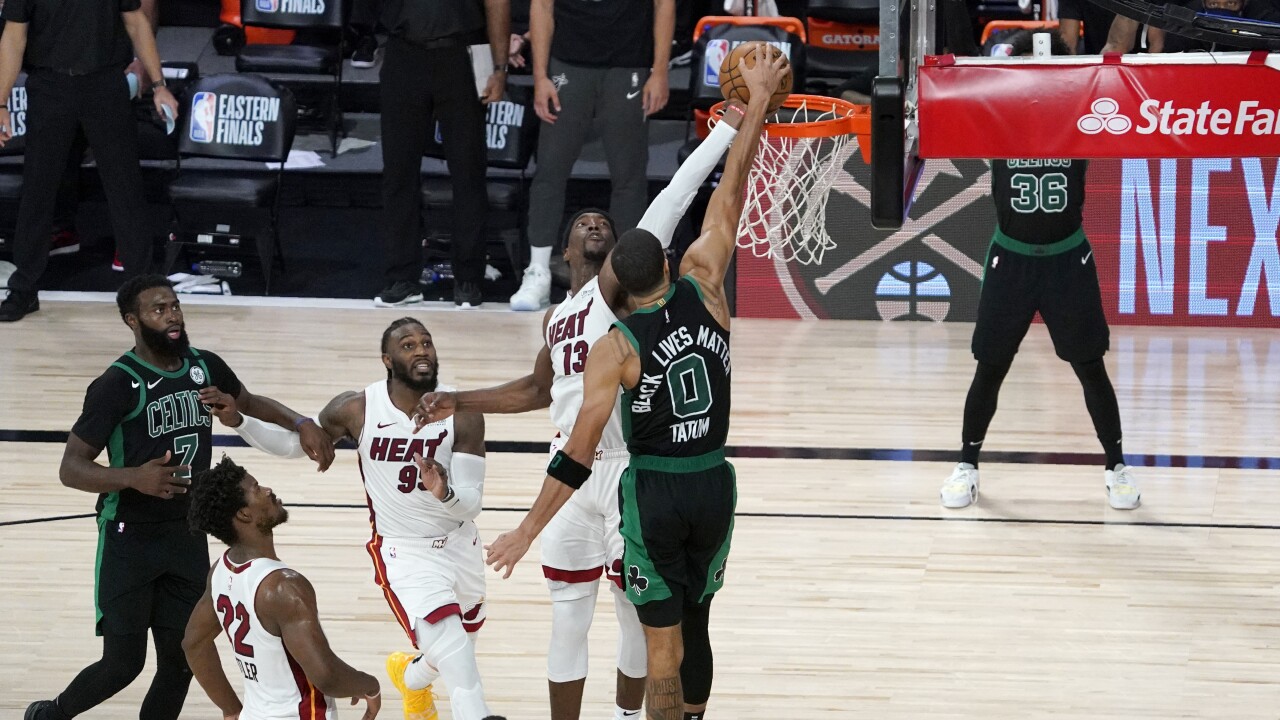 (Copyright 2020 The Associated Press. All rights reserved. This material may not be published, broadcast, rewritten or redistributed.)
Mark J. Terrill/AP
The Boston Celtics' Jaylen Brown (7), Miami Heat's Jimmy Butler (22) and Jae Crowder (99) look on as Bam Adebayo (13) blocks a shot attempt by the Celtics' Jayson Tatum (0) in the closing seconds of overtime of the opening game of the NBA Eastern Conference Finals, Tuesday, Sept. 15, 2020, in Lake Buena Vista, Fla.

LAKE BUENA VISTA, Fla. — Jimmy Butler thought he won the game for Miami with a 3-pointer late in regulation. He put the Heat ahead again in overtime -- and then Bam Adebayo finished it off with the biggest block of his career.

Butler's three-point play with 12 seconds left put Miami up for good, Adebayo blocked Jayson Tatum's dunk attempt in the final moments and the Heat rallied time and again to beat the Boston Celtics 117-114 in Game 1 of the Eastern Conference Finals on Tuesday night.

Kemba Walker's basket with 23.2 seconds left in overtime put Boston up by one, before Butler muscled his way to the rim for a score while getting fouled by Tatum. The Celtics went to Tatum on the ensuing possession, only to watch him get denied by Adebayo.

The Heat -- down by 13 in the first quarter, down by 14 in the fourth -- struck first, ending Boston's seven-game streak of Game 1 wins.

Tatum scored 30 points for the Celtics, Marcus Smart had 26 points, Walker had 19 and Jaylen Brown added 17. Goran Dragic had 29 points, Jae Crowder scored 22, Jimmy Butler scored 20 and Adebayo had 18 for the Heat.

Miami's Tyler Herro was one assist shy of a triple-double -- finishing with 12 points, 11 rebounds and nine assists.