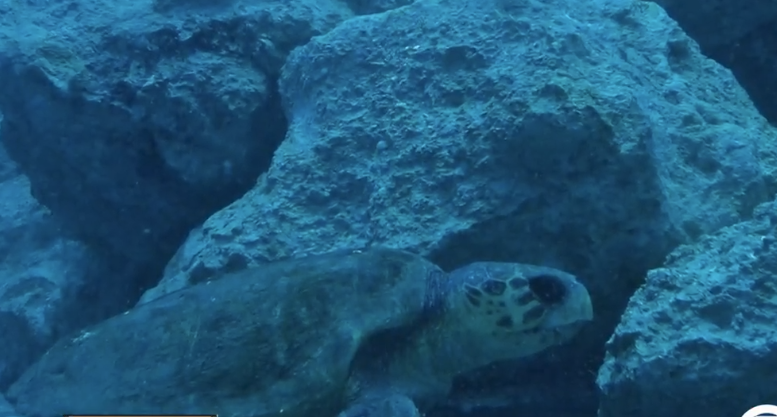 JUPITER, Fla. — A local non-profit is taking no breaks this summer vacation.

The Andrew “Red” Harris Foundation is continuing to build artificial reefs off the coast of northern Palm Beach County with their deployment of 286 specially manufactured, three ton artificial reef modules this summer on a site where the county is also deploying 630 tons of natural limestone boulders.

And they’re also reaching new milestones this year, both on and off the water.

WPTV joined the foundation on the water on Wednesday as they test-dropped a newly-designed 3 ton artificial reef module they hope will help them further achieve their mission of building new marine life breeding habitats to support future fish populations.

“Our natural reefs are not getting any bigger, they’re actually getting smaller and our population and the associated pressure on our marine environment is doubling and quadrupling. The pressure from fishing and diving is overwhelming the reefs,” said foundation founder, Scott Harris. “We can do a lot to begin restoring balance and our artificial reefs are making a difference.”

On Wednesday, he watched his son Andrew’s legacy come to life once again, as a bulldozer dropped more modules into the ocean water one by one.

“Today’s where the rubber hits the road,” he said.

Andrew Harris, a Jupiter native, was only 26 years old when he was killed by a boat while diving near the Jupiter Inlet in June 2014.

Since then, his family created the foundation and is helping to bring life back to the environment Andrew loved so much.

To date, over 600 manufactured artificial reef modules have been deployed in the northern Palm Beach county area, but this new design is their best yet.

“The hollow boulders that we made this year, they should last forever. They are made with ultra high-strength concrete, they are impervious to hurricanes, impervious to anchors,” said Harris. “Where we’re putting the boulders probably was a vibrant reef 100 to 200 years ago and it will be again, as our manufactured hollow boulders build the backbone and the skeleton of what’s going to be a vibrant reef in the future.”

In a unique partnership, the Andrew "Red" Harris Foundation has donated thousands of tons of artificial reef material, both natural limestone and the manufactured concrete modules, so far to the county to help build the reefs in the Jupiter and Juno Beach area. In turn, the county covers the cost of the deployments, providing the trucking from the construction site to the barge and then the barge and machinery to place the manufactured and natural boulders into the water.

“We’re so lucky to have such great partners right here in the county, they’ve donated countless amounts of material,” said Jena McNeal, an environmental analyst for Palm Beach County, who has been working with the foundation on this effort.

After test-dropping the new modules this week, eight out of eight did not break when they slammed into the ocean floor after being dropped 80 feet from the surface.

“That was exactly what we were hoping for, had my fingers crossed and my toes crossed,” said Harris after completing a dive to inspect the boulders.

That means the foundation does not need to lower the boulders by crane, which would be harder and much more expensive. The remaining 278 modules will be deployed next week.

“We’re building substrate for future reefs. The Gulf Stream-driven current hits our huge 3 ton modules and scours off the thin sand layer that covers the ocean bedrock on the sites we choose for our reefs. I think this sand has smothered and killed what was probably a beautiful reef on our site 100 years ago and maybe for thousands of years before that. A grain of sand at a time 24/7 the millions-of-years old bedrock is re-exposed allowing sea plant life to return and flourish. Provided a suitable substrate to grow a new reef that's part artificial and part natural, mother nature takes care of the rest,” said Harris. “But to make this a thriving vibrant reef, it’s going to take five to 10 years for everything to grow out.”

After each deployment, Harris and the county dive below the surface to observe the result of the deployment, whether the concrete modules broke when the hit the bottom and how they dispersed on the way down. Small fish and sea turtles are already enjoying the new modules.

“The boulder pile we deployed two days ago had a couple hundred fish on it today. The pile that went down about a half hour ago had a dozen fish on it already.” said Harris.

Teaching the next generation

Meanwhile, back at the Harris home, the family is also pursuing the part of their mission to protect the marine environment by educating children.

They're doing that through a five book set of elementary readers featuring Andrew called, “Professor Clark the Science Shark”.

The books are produced by Scott and Karen Lamberson, a local family who started the series in 2011. They incorporated Andrew as the human representative in each of the five books, putting Andrew on the cover of their fourth and fifth books.

“It’s the story of a little boy who meets an orphaned tiger shark pup and they grow up together. The marine animals communicate through Andrew to the human world about their problems,” said Harris. “This is one of the most special things, seeing Andrew in these books. Creating a living legacy to teach kids to love the ocean.”

The foundation has donated 11,000 sets to third graders in 24 counties across Florida that have agreed to use the series in each third grade classroom as part of their science and reading curriculum indefinitely into the future, 55,000 books in all.

In South Florida, the Professor Clark the Science Shark books are in every third grade classroom in Palm Beach, Martin, St Lucie, Broward and Monroe counties. In central and northeast Florida they are in Brevard, Volusia, Osceola, Flagler, Clay and Duval. Pensacola and Panama City districts in the panhandle have them, as well as Hillborough, Pinellas, Polk and Charlotte on the west coast and a number of smaller districts all over the state.

“We’ve received hundreds of thank yous from kids across the state,” said Harris. It's been an education for us reading the thank yous and seeing how little most kids know about the ocean and how excited they are to learn more.

The foundation hopes all of this will send the message Andrew always wanted to share with the rest of the world.

“We know that other kids will feel the same way that Andrew did about our ocean,” said Andrew’s mother, Martha Harris.

The foundation is always looking for assistance to keep their mission moving.

Donations are tax deductible and hundreds of locals have contributed funds or silent auction prizes as have other businesses and foundations all over the country.

The foundation's good work has been widely recognized and the Loggerhead Marinelife Center's "Go Blue" awards panel of 10 international environmentalists chose the foundation as it's 2016 "Blue Ambassador of the Year". In 2018, the foundation became the first two time Go Blue winner when it was chosen as the "Business of the Year".

The foundation's 6th annual golf tournament and silent auction is October 19 at the Turtle Creek Club in Tequesta.

For more information, contact Scott Harris at scottharrisins@gmail.com or 561-718-7348.