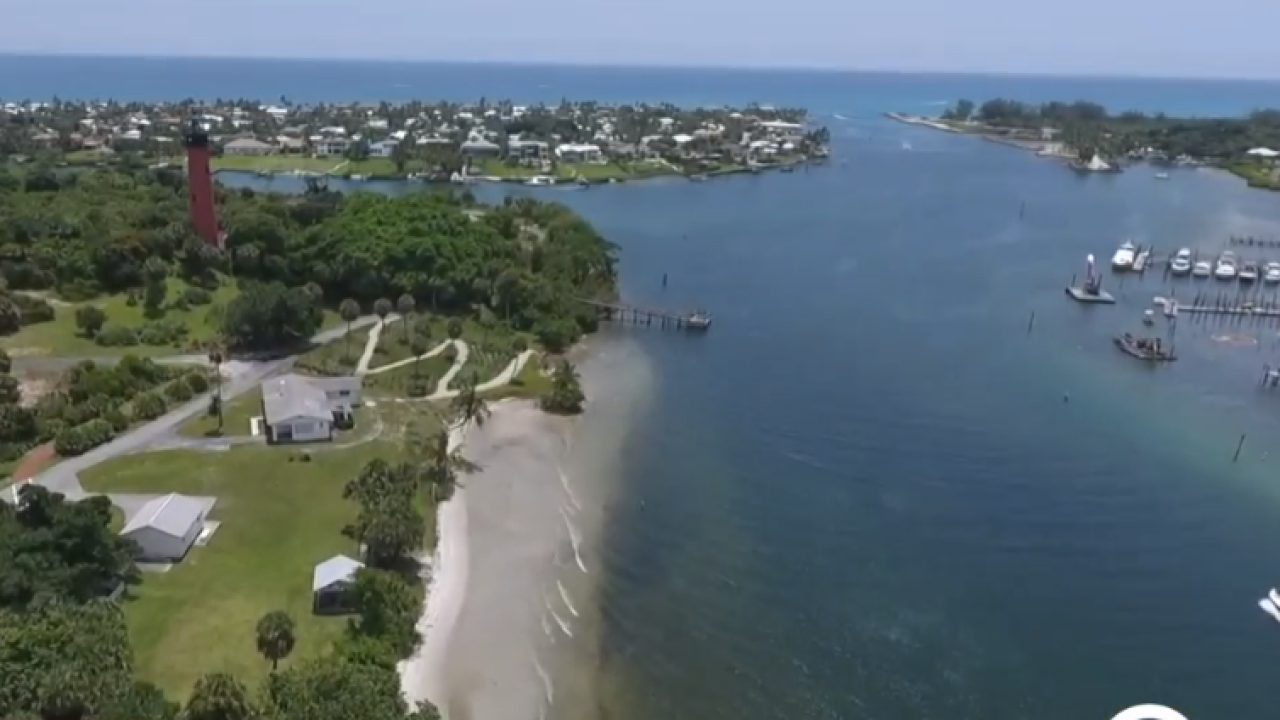 JUPITER, Fla. -- Nature and history go hand in hand. That’s especially true at the Jupiter Inlet Lighthouse & Museum property, where so much work goes into keeping that history alive.

And there are new projects coming up that are helping to preserve the land from the ever-changing environment.

“Our motto has always been, history shaped by nature,” said Jamie Stuve, president, and CEO of the Loxahatchee River Historical Society and Jupiter Inlet Lighthouse.

And it certainly takes a village to protect thousands of years of history around what has become a symbol of Jupiter.

"The history is surrounded by 120 acres of native habitat and we're always working to enhance and improve that," said Stuve.

The lighthouse was first constructed in 1860 to save ships from wrecking in the reefs offshore. The site eventually included a U.S. Weather Bureau Station, a Navy radio station during WWII, and a U.S. Air Force missile tracking station. It still operates as a maritime navigation aid.

It wasn't until the early 1970s that the non-profit, Loxahatchee River Historical Society, was founded to preserve the area's history.

Over the years, they’ve restored historical buildings, maintained the lighthouse fixtures, and planted native vegetation on the property to restore it to what it once looked like for the Native Americans who once inhabited the site.

The beach erosion at the site is caused by decades of storm surge, boat wakes and dredging — occurrences that are out of the lighthouse property’s control.

Historian Josh Liller said the erosion has reached several feet that now, part of an old seawall from the 1920s is exposed.

“One of the big challenges here is the big sand flats right behind us that’s exposed at low tide,” he said, pointing to the beach on the southern side of the property along the Loxahatchee. “Up until the 1980s that was dry ground.”

The erosion runs a few hundred feet in this area.

“And there’s even some areas that are starting to get sand bluffs exposed here, so once it gets vertical, it picks up the erosion rate,” said Liller. “Over near the dock, there’s an area where there was a ceremony in the late ‘60s to dedicate the historical marker for the lighthouse — the site of that ceremony is now in the water.”

To fix the beach erosion, the U.S. Bureau of Land Management (BLM) is teaming up with the Jupiter Inlet District to create a ‘living shoreline’ using mangroves.

“There’s nothing on the shoreline here to really help hold it together,” said Liller.

But the mangroves will help change that, as well as bring in more fish and shellfish to find a thriving environment to live in.

“Living shorelines like they’re planning to do here are a great thing for helping to hold the shores together,” said Liller. “I’ve seen places where, once you plant the mangroves and they get to adulthood and they’re putting down their prop roots, the difference is very visually noticeable. You see the sandbars building up behind them.”

The living shoreline project will be covered by BLM and the inlet district, as well as potential grant money.

A fresh coat of paint

Mother nature has not been kind to the lighthouse, either.

In fact, it’s due for a new paint job for the first time in 10 years. The historical society is planning to kick off that project this fall for the continued preservation of the lighthouse tower.

“Keeping up with mother nature at this site is a challenge. Not just at hurricane season, but throughout the year.,” said Stuve. “The salt, humidity and the heat all take its toll on historic structures.”

The lighthouse was painted in the 1910s with a special type of paint from Germany called Keim. Because bricks can hold a lot of moisture, this paint allows the lighthouse bricks to "breathe" in a humid environment.

The German company still operates today and crews will be using it for the new paint job.

“You can’t just grab some latex paint from Sherman Williams and slap it on there, it would be bad for the brick,” said Liller.

Painting will also be done to the interior walls of the lighthouse, including the metal stairs and handrails.

“You have tens of thousands of visitors every year walking up and down those stairs, clinging tightly with sweaty palms to the railing,” Liller said.

Stuve said this March alone, they had over 500 visitors per day.

“If you do the calculations, that’s literally 150,000 steps in one day that people take. Imagine the impact of that on the structures. We’re always in the context of maintenance,” she said.

The painting project costs over $150,000, which the lighthouse is trying to pay for through fundraising efforts. They still have $50,000 more dollars to go.

In the last two years, the historical society has restored a lighthouse keeper’s workshop building. They also raised money and received a grant to install a historical exhibit inside.

Next, they want to improve the dock near the lighthouse — sealed off from the public and grown over with vegetation — and turn it into a lookout point for guests.

“The history is surrounded by 120 acres of native habitat," said Stuve. "We are always working to preserver and enhance that."

The museum also prepares for every hurricane season.

“It’s a big challenge. We have to plan,” said Liller.

He added that’s the reason why they want to expand in the future with a heritage center on the site.

“We’re in a WWII building, 1942 wooden building that is 50 feet from the river,” he said. “A modern heritage center, LEED certified, concrete, hurricane resistant — something that is much more secure and allows us to be safe in a storm and not have to have as many concerns and preparations as we have to today.”

There’s also talks of a weather bureau replica on site to serve as a STEM center and talk about the history of the National Weather Service at the property.

Liller and his team are currently working on more storage for their archives and working to find people with historical artifacts, photographs, and information about the property.

“It’s things like that, people reaching out to share with us that helps us preserve this and expand in the future with exhibits,” he said.

But a lot of these other projects aren’t possible without the support of donations and the community.

“We want show them that there is such a depth and breadth of history that they didn’t know — and that it’s important to preserve it,” said Liller.

If you would like to donate or learn more information about the Jupiter Inlet Lighthouse & Museum, click here .