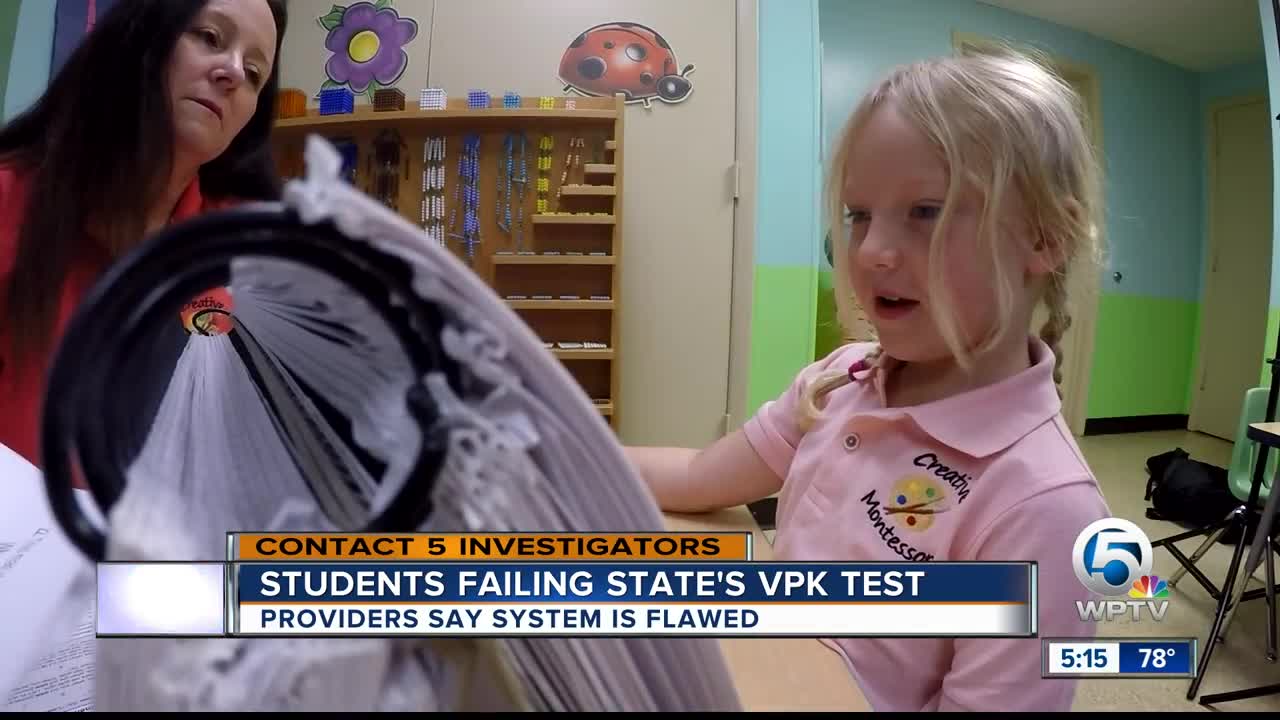 Providers say the system is flawed. 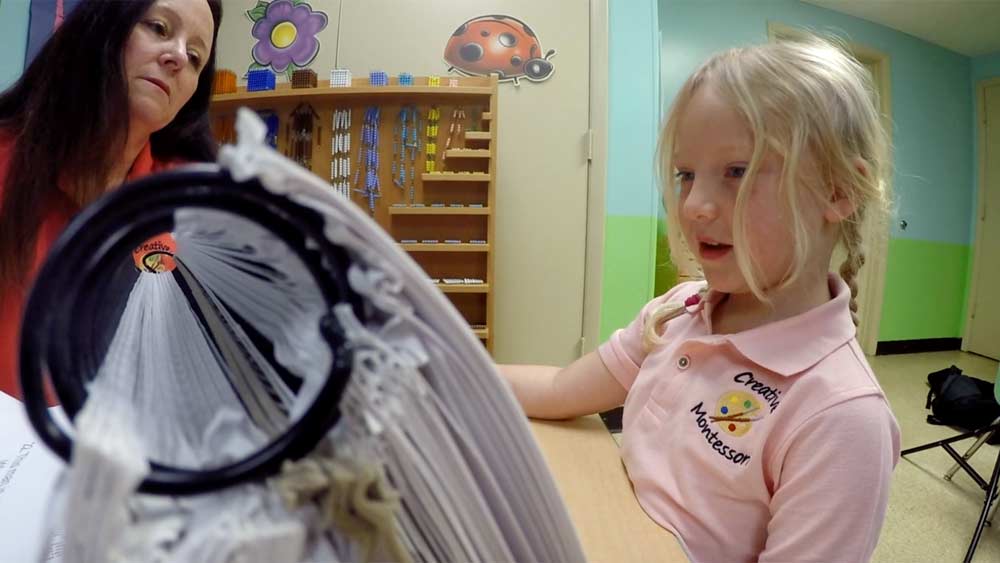 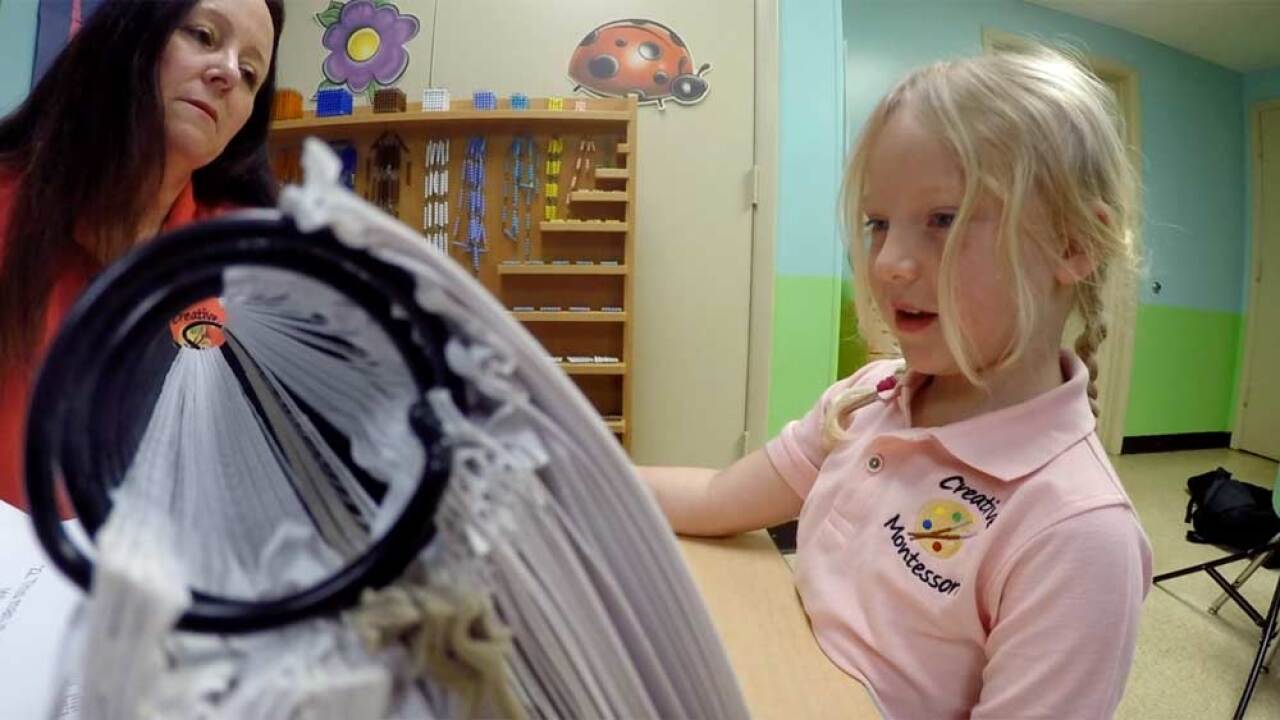 --- Whether you make $10,000, or $10 million a year, Florida says your 4 or 5 year old is entitled to a free program called voluntary Pre-Kindergarten, also known as VPK. The goal is to give kids a leg up going into kindergarten.

--- So why, according to the latest available scores, has Contact 5 found nearly half of the kids in the state aren't ready for kindergarten? And why do some VPK providers feel like they are being slandered by these scores?

"I love teaching that age. They are like little sponges," said teacher Patty Paige.

For 25 years, Paige has been teaching Voluntary Prekindergarten (VPK) and founded the Creative Montessori Academy. Before that, she was a VPK teacher, working at other child care sessions.

"It helps teach them social, pre-math, pre-language, literacy," says Paige. "It’s for them to learn through play. They learn all the math, the language, recognition of the numbers, how to be a good friend, how to be social, how to be in a classroom environment, lining up."

Besides teaching their daily lessons, Paige tests the kids three times a year, per VPK rules.

"We use a flip book and we test them," says Paige.

The results she sees with those tests are impressive.

But those are just practice assessments. The real test is given to VPK students once they reach kindergarten.

According to the latest scores available, nearly half of all kids (45 percent) in Florida failed, meaning they "aren't ready for kindergarten."

These scores are based on children who attended VPK during the 2016-17 school year.

WHY ARE KIDS FAILING?

Paige says it's the testing system that's failing kids, not the other way around.

"Most of them have never used a mouse or a computer to be tested on," says Paige.

One problem: these kids are going from flip books, to computers. It's a change made two years ago, when the new STAR computer based assessment was given for the first time in fall of 2017. "You are teaching them one way and then when they go to kindergarten, it's done a different way," says Paige.

Some of the computer skills required to take the test aren’t part of the state’s standards, according to VPK providers.

Paige went out and bought computers to help her kids prepare for the test. But she knows that luxury isn't available to everyone.

Another issue, is students don't take the test until kindergarten, three months after summer break.

"At home, they could be sitting on grandma's couch, all summer watching TV and not doing anything educational. And then they forget everything they learn in VPK," says Paige. "All through your school year, first grade, second grade, college, you take a class and then you take the final right away. You don’t wait three months and come back and take the final."

VPK providers are put on probation if fewer than 60 percent of their children pass the assessment given within the first 30 days of the child starting kindergarten.

"Oh, that's terrible. I’ve never got a 54 on anything in my life, let alone grading my school which can affect my business. It can affect how people pick a school," says Paige. "I’m a certified-Montessori teacher, so my children go advanced to kindergarten. I’ve had gifted children. I’ve been doing this for years. I know how to teach VPK. I’m a very good VPK teacher."

The latest available set of scores show 42 percent of the state's VPK providers are at probation level because of their scores. Forty-seven percent of all providers in Palm Beach County "failed".

"After you are on probation, if you don't bring that score up, you can lose your VPK," says Paige.

The scores are drastically different from the last published scores, years ago. The recent scores show a significant slide. VPK providers feel their schools are being slandered by the bad grades, because they aren't accurate.

Paige says parents shouldn't use the scores to pick a school because it's not truly representative of what she or other VPK providers do.

The scores in this story are based on children who attended VPK during the 2016-17 school year. Contact 5 has been asking for weeks for the 2017-2018 scores, but the state Office of Early Learning has not responded to that request.

The state admits, with how the testing works now, they aren't sure if the scores are accurate or valid. Because of all the questions surrounding them, it's hard to determine whether the program is successful or not.

"I think that's the issue. It's that it's just hard to say. I really couldn't say that they are or are not, because of the way they're being administered," said Dr. Saralyn Grass, Executive Director of the Association of Early Learning Coalitions.

A bill to try and overhaul the $400 million program was introduced this year by Florida Rep. Erin Grall (R-Vero Beach) and Rep. Vance Aloupis (R-Miami-Dade). A similar bill was introduced in the Senate by Sen. Gayle Harrell (R-Stuart) after the House version gained unanimous support in its first subcommittee.

The bill would put the test at the end of the VPK school year, and on kid-friendly tablets, instead of a mouse.

It would also change the way teachers are scored.

"I think the real issue is that we would like to see growth, so not just where the child is at after pre-K when they are in (kindergarten), but actually what happened during the school year in VPK," said Grass. "I think what we know anecdotally is that often the children that come in that are most at risk, may not present as being ready for (kindergarten) on their scores, but they’ve made a lot of growth during the year."

"How can people not look me in the face and tell me they're not ashamed that we haven't created a system where we know what is quality and what is not," says Aloupis. "We spend $400 million a year, and you can't tell me which programs are doing well and which ones are not based upon the current assessments."

Aloupis says he's been trying to improve the early education system for more than 10 years now. It's his first time in the Legislature, and this is his goal.

While WPTV was reporting on this story, the bill died.

"It’s a massive piece of legislation. It’s not a one page bill," said Aloupis. "What you don’t want with a bill is to roll it out and begin to see people stepping up in opposition for conversations that you haven’t had."

"Let’s have conversations this summer. A lot of different folks want to have their thoughts, their concerns heard," said Aloupis when asked what's next. "What Representative Grall and I would like to see is really having conversations with the Department of Education, having conversations with both House and Senate education staff, bringing childcare community provider to the tables, make sure everybody understands what kind of system is being built around VPK."

"It’s just something (that) needs to change in order to make it better," said Paige.