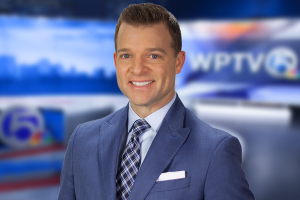 Born/Raised:
Jay was born in New Orleans, LA and grew up 50 miles north of the city in Folsom, LA.

Education:
Jay graduated from the University of Alabama with a degree in Broadcasting and minors in English and Geography.

Jay has been working for WPTV as a reporter and anchor since 2001. He currently anchors the 5:30 p.m. news on WPTV, The Now at 6:30 p.m. on WFLX Fox 29 and the 10 p.m. news on WFLX Fox 29. Over the years he has won multiple Associated Press awards along with 14 nominations for Emmy awards many for his stories focusing on ocean conservation and the environment. In December of 2008 Jay won a Suncoast Emmy for “Wounded Warriors.” The piece was shot on location in Bonaire in August of 2007 highlighting a group of single and double amputee soldiers who were diving for the first time since returning from war. The story aired as part of Jay’s series “Underwater Wednesdays” which featured and promoted stories surrounding coral reef and ocean awareness. That series also earned Jay a community service award from the US Coral Reef Task Force in 2004 for increasing public awareness on coral reef conservation. Jay has drifted in ocean currents over multiple wrecks and reefs in the Keys, Bahamas, Turks and Caicos, Bora Bora, Cayman Islands, Bonaire, St. Thomas, The Dominican Republic and South Florida.

Jay has covered a wide range of stories in his career as a journalist. He took the ride of his life in 2000 when he flew with the Blue Angels in preparation for a South Carolina air show. He was one of the first reporters to hit the ground in Haiti hours after the disastrous earthquake of January 2010 and was on the white sand beaches of the Florida panhandle that same year following the devastating Gulf oil spill. Jay covered the hurricanes of 2004 and 2005 extensively which battered South Florida. He also covered the most personal story of his career in 2005 when he traveled back home to help his family dig out and recover during the aftermath of Hurricane Katrina. He anchored live coverage outside the Palm Beach County Courthouse every day during the trial of polo mogul John Goodman in March of 2011 and recently spent 7 hours in the Everglades hunting pythons. He’s also taken a stronghold over the last decade and a half covering environmental reports including the deterioration of the last living reef in the country in the Florida Keys.

Jay enjoys running, surfing, swimming, biking and being a father. He and his wife Kelly welcomed their son Cruz into the world in 2012 and their daughter Ella in 2014. They also rescued a 180-pound Great Dane (their gentle giant) named Jake from the Humane Society of the Treasure Coast. Jay is a 1997 graduate of the University of Alabama which means on Saturday's in the Fall you can find him watching and enjoying Alabama football. Roll Tide! Jay has competed in multiple triathlons since 2013 including the Loggerhead Sprint and Turtleman triathlons in Jupiter and enjoys training with local tri-athletes. Jay emcees numerous events throughout the year for many charities and works closely with several including Forgotten Soldiers Outreach, Humane Society of the Treasure Coast, Juvenile Diabetes Research Foundation, Palm Beach County’s Business Development Board. He is also involved with the South Florida Fair, Cystic Fibrosis Foundation of Palm Beach County and the Palm Beach County Food and Wine Festival, an event where he met his wife Kelly in 2008.