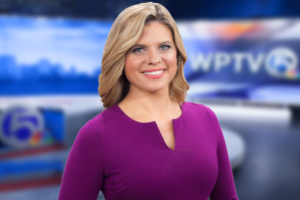 Work at WPTV has sent anchor Ashleigh Walters to other parts of the state and country, and of course every corner of the viewing area.

Prior to WPTV, Ashleigh worked as an anchor and multi-media journalist at WLTX in Columbia, South Carolina. Honored as Reporter of the Year by the South Carolina Broadcasters Association, plus awards from the Associated Press and RTNDA, her legislative and education stories were often national headlines. At KUSA in Denver, Colorado, she was host and producer on a live magazine-style show, interviewing celebrities, news figures and notables.

Ashleigh earned degrees in Broadcast News and Fine Arts Painting plus a minor in Business Administration at the University of Colorado at Boulder. She is an avid painter, traveler and photographer who loves animals, shopping and oddly scaled items.

Ashleigh looks for story ideas around every corner.